A Day in Brussels, Belgium

Our three-day trip to Belgium involved a whole day exploring Brussels, the capital. One day is enough to hit the highlights, but to get to do some of the museums, more time is better. For more on Belgium, check out how we spent three days there here! We visited in August, which was nice.

For a fun fact, Brussels is the capital of the European Union and NATO. We saw the building with the EU flag and lots of armed soldiers around. Pretty neat.

Belgium is known for a lot of rather unhealthy food too I might add. These include waffles, chocolate, french fries (or chips if you’re British), mussels, and beer. Later to come is a self guided chocolate tour! Godiva chocolate, which I’m sure you’ve heard of, is Belgian in fact!

Getting around Brussels is quite simple. The main sights, apart from The Atomium, are within walking distance. The city does have public transport including subways, trams, buses, and we did use Uber twice late at night to get to our hotel. We used the subway as transport to The Atomium and back.

Below is how we spent a day in Brussels.

This is the center square, and on the list of UNESCO World Heritage Sites. When you walk into the square, it’s amazing. Some of the buildings are trimmed in gold. The Town Hall is usually the most noted one here (which actually reminded us of the Marienplatz in Munich, Germany). The whole area in the square is a pedestrian zone. There are plenty of places to hang out, sit down for a meal, and museums all in the square. We came back here at night to marvel at all the lights!

This is a statue of a naked little boy peeing as a water fountain. I’m not sure what the obsession is with this, but people crowd around it, and it’s on all the souvenirs. Several times a week, the sculpture is dressed in costumes (we were not lucky enough to witness this). There is even a museum that holds all of his different outfits! This fountain shows the locals interesting sense of humor. There is also the sister of the peeing statue called Jeanneke-Pis, and a dog called Zinneke Pis in different parts of the city. These people are obsessed with peeing stuff! We saw Jeanneke-Pis when we were on the way to the Royal Gallery of Saint Hubert (see below #7).

Many of the buildings have murals of comic strips in random places around Brussels (how awesome!). We did not hunt for all of them specifically (due to pigging out on chocolate and waffles probably), but we did see quite a few just by going to the main tourists sights! Did you know that The Adventures of Tintin was created by a Belgian cartoonist? If you are really into comics, go check out The Belgian Comic Strip Center museum.

Go up to the balcony and have a free view of the gardens. You can even see the Town Hall rising above from the Grand Place.

I didn’t know Belgium still had a royal family until we visited here. This is the where the King and Queen live! We were surprised that we could enter for free, because it’s open to the public during part of the summer. The inside was amazing. The room we found most interesting was called The Mirror Room (although I don’t remember any mirrors ha). The ceiling and  one of the chandeliers was covered in over a million and a half wing cases of green jewel beetles. 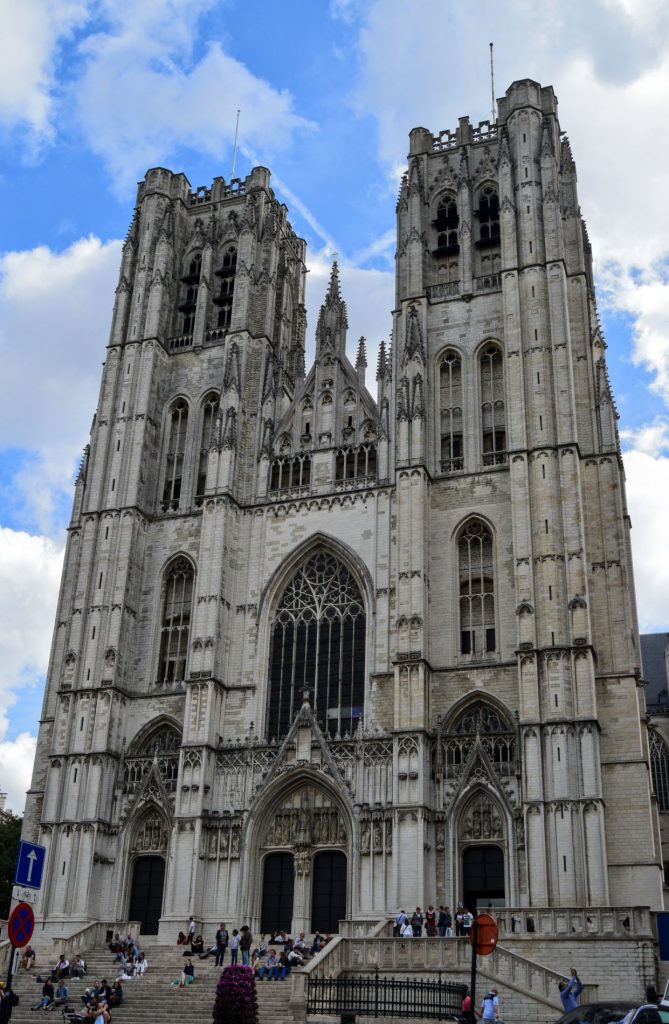 Free to go inside! The outside reminded us of the Notre-Dame of Paris.

A covered elegant shopping complex built in 1847, and also the location we began our self-guided chocolate tour! Yum.

A public space and gardens dotted with monuments and museums, with a huge arch. It is meant to commemorate Belgian’s fiftieth anniversary of independence in 1880.  The arch reminded us of the Brandenburg Gate in Berlin.

We took a train here to see this huge statue. With a ticket, you can go to the top. It was closed when we went, but we just wanted to see it from the outside anyway. You can buy a ticket to go up. It resembles a magnified iron atom, and is a landmark in Brussels. We were there in the evening in time for the lights to come on! When we visited, there was an event to celebrate the 60th anniversary of The Atomium with live music and food stands!

We thoroughly enjoyed Brussels and would say it was our favorite out of the cities in Belgium we visited.

If you are planning your next trip, don’t forget to book some travel insurance. You never know what could happen.

So what would you do for a day in Brussels? What’s the first thing that comes to mind when you think of Belgium? We would love to hear, so please comment below!