A Day Trip to Bristol, UK

Bristol is about a 2-hour drive from the London area. Bristol is an old city on the southwestern coast of England, sitting on a harbor. It’s a city with a couple of universities and is pretty hip. It’s just a bit farther west of Bath, and considerably larger.

We took a day trip at the end of August, during the annual Bristol International Balloon Fiesta. This is Europe’s largest meeting of hot air balloons. This is an event that last for 4 days every August and mass ascents of up to 100 balloons daily. We were so excited to get a chance to witness this. The day we went, they were scheduled to lift at 6AM and 6PM. Of course we were not in time for the morning, but were counting on the evening one. We went, and the ascent was canceled due to the weather. It was too windy with threats of rain. I seriously pouted for about 20 minutes before I got over not seeing it. Luckily, we spent the entire day exploring the beauty of Bristol though!

If you do make a visit to Bristol, I’ll give a few highlights that you will want to see that we found fun! I really loved all the colorful rows of houses, and the unexpected Avon Gorge. So here’s a step by step of our day! 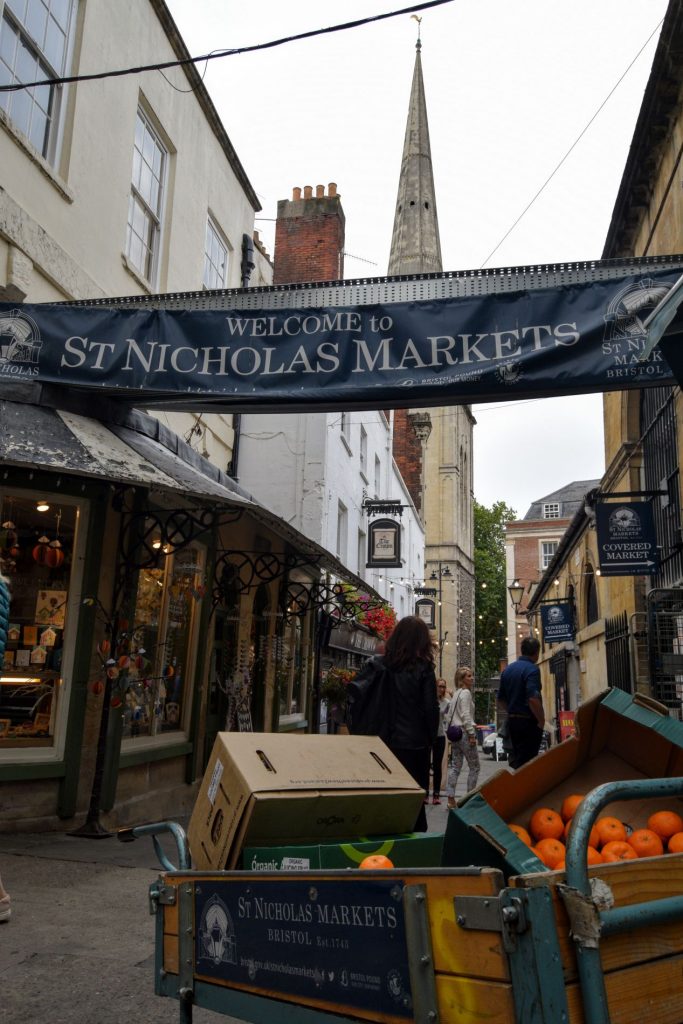 We loved this market, with stalls inside and outside throughout the streets. This market has been here since 1743, and is the oldest and largest in Bristol. There are all sorts of things being sold, even antiques, but as always, we enjoyed the food the most! Since we drove in the morning, we started off with a coffee, and a lemon and courgette (zucchini) cake slice at Be Natural. Great way to get started!

This is a huge bridge over the Avon Gorge and River Avon, which opened in 1864. We drove to it to park a little closer, but accidentally got on the road to drive over it, and it cost £1. So we just found parking on the street once we drove across. We were so shocked at the view of the gorge because it was unexpected. We walked across, like everyone else was doing. There is a free exhibition center about the bridge that is cool to walk in to learn a bit of the history. Take a walk up the hill that the Clifton Observatory sits on, because it’s nice for a photo of the bridge from here.

After seeing the bridge, we went to Brandon Hill, to go up the Cabot Tower. This is a 105 foot tower built in 1897 to commemorate John Cabot’s voyage to North America from Bristol. The tower is free to go up, but there is only one narrow winding staircase for people to go up and down…at the same time. There were times people had to stand against the wall, waiting for others to pass. There were so many tourists here too. The view would have been nicer for us if it wasn’t about to rain! 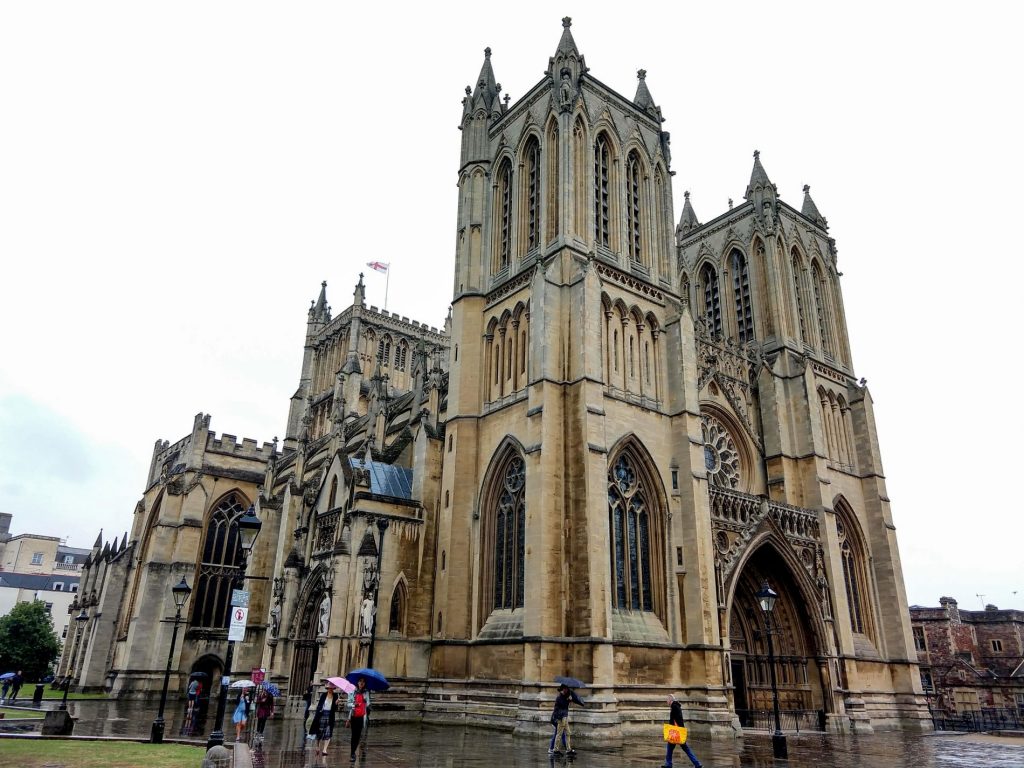 This was pretty. Admission is free, so why not have a look? England and Europe have so many cathedrals, they start looking the same after awhile.

After we drove back across one of the bridges in Bristol, I noticed these colorful houses on a hill. They were so pretty. Then we found that there are a number of them everywhere. The ones we saw from the bridge are in a small residential suburb called Cliftonwood. It’s just a few streets, easily walkable. The main roads are Cliftonwood Terrace, Church Lane, all the Ambra Vale roads, and Ambrose Road. Such picturesque terrace houses all bright colors. Also, try to spot the mosaic art of hot air balloons on the stone walls! Bristol are proud of their annual event I suppose!

This is an awesome area to walk around, have some food, people watch, go kayaking, paddle boarding, or whatever else you fancy. Sitting on the river is a museum ship called Brunel’s SS Great Britain, and is considered Bristol’s top attraction. We did not do the tour, just walked past it on the stroll down the river. Also walk through Millennium Square, or take a boat tour around the harbor, or find plenty of eating places and coffee shops to relax in.

The estate and the fiesta that was going on.

This is the site where the Balloon Fiesta happens yearly. The city provided shuttles here for the event. After we arrive is when we find out the mass balloon lift is cancelled, but it did not stop the crowds going to enjoy the huge event of music, games and food. There was still fireworks planned after dark, and a night glow. On the way to the Fiesta, we walked past the Ashton Court Mansion that sits on 850 acres of land.

More colorful houses we found at the end of the day before going home!

Despite missing the one thing we came to see (the hot air balloons), we still enjoyed Bristol. I’d say go! It feels nice to know we could return easily with a short road trip. There are buses and trains that can be taken to Bristol from London as well. August is a nice time to visit because of the hot air balloon event, and the weather is usually good (except when we were there!).

What are your thoughts on Bristol? How would you spend a day out here? Comment below and let us know!