A Day Trip to Paris from London

Thanks to the great Eurostar train, you can get to Paris from London in 2 ½ hours! Paris is known to be one of the most romantic cities in the world. A day trip to Paris makes for an exhausting day but it can be done. If you’ve never been to Paris before, more than one day is necessary to fully appreciate it, but it is possible to hit the major sights and even squeeze in a crepe. We got the 7:15am to Paris and caught the train back to London at 9:13pm. Here’s our itinerary to show how to make this possible!

*Note that the currency is the Euro in France and not the British Pound.

Marvin and I had been to Paris on a previous Europe trip in 2014, so this time we took my family there for a short trip while they visited us in London.

The day starts off by taking the Eurostar train from the St. Pancras International Station in London. Book your tickets ahead through the website. Usually the earlier you book, the better deal you get.

Arrive at least 1 hour prior to the train departure time because you have to go through security and passport control. *Bring your passports!!! The French police will stamp your passport. On the train there is free wifi although spotty at times. Hidden below between the chairs are outlets if you need to charge your phone or computer. The train goes up to about 200 mph and you go underground through the English Channel. You will know when you go through it because everything is dark while under. You can also take the high-speed Eurostar to Belgium and the Netherlands. 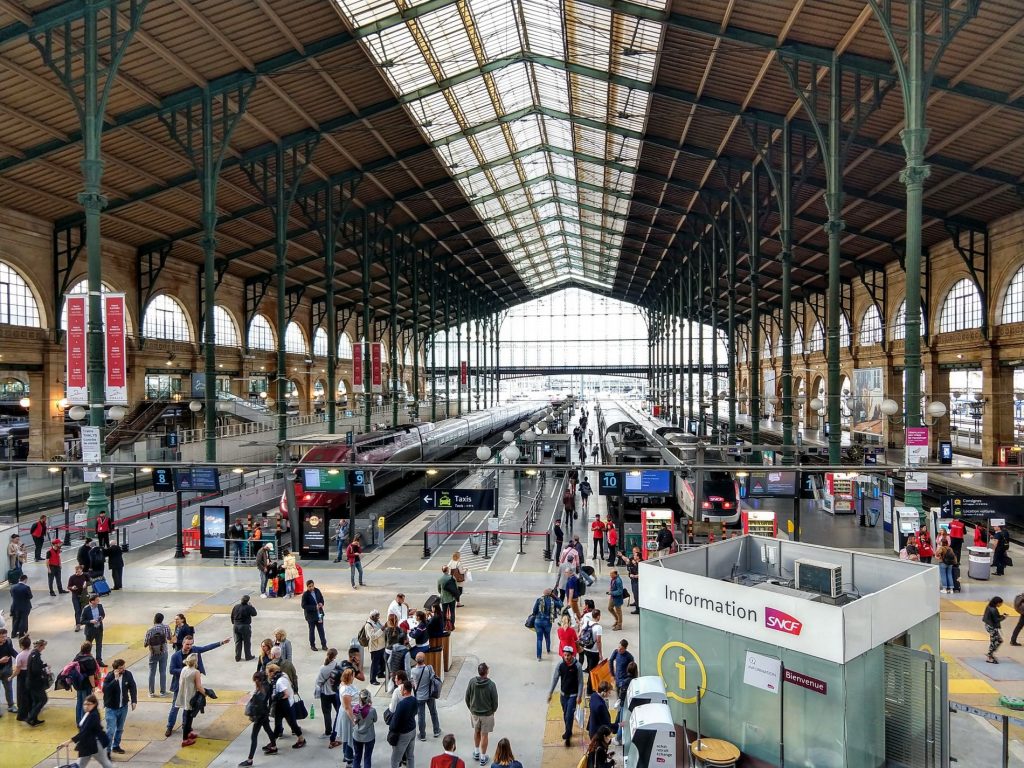 This is the station the Eurostar arrives to. It can be a little confusing to get out of here. If you don’t already have some kind of travel/transportation pass for Paris yet, head over to the ticket counters and ask for a 1 day travel card for zones 1-3. This will get you around all the Paris sights and back to the Gare du Nord station for your return. This ticket includes the subways and buses.

Now you are set to go and see the sights. Bring your best walking shoes!

Hop on the subway and get off at the closest station to the Louvre. Find your way to the Louvre Museum. This building is massive and is the world’s largest art museum. Formerly once a royal palace. Today the entrance to the museum is the iconic glass pyramid that you probably see in people’s snapshots. The Mona Lisa is the most famous piece held here. You need a couple of hours to really explore the museum so I don’t think it’s advisable to do on a 1 day trip unless you pass on another sight.

After leaving the Louvre, take a stroll along the Seine River to enjoy the view and head towards the Notre Dame (Our Lady) Cathedral. The cathedral is on a small island in the river called Île de la Cité (Island City). The Notre-Dame is a medieval Catholic cathedral constructed with French Gothic architecture.

Don’t forget to take a look up and find the gargoyles on the outside. Inside are 3 rose windows that are characteristic for the time period each with a tiny picture in each section.

Go inside and check the cathedral out. If the line is long outside, don’t worry because it generally moves pretty fast. Admission is free with donations accepted, but note that no luggage is allowed. Bookbags are fine though.

After being in awe from the cathedral, now is your chance to grab a crepe or a French hotdog baguette on the streets of the island. There are plenty of souvenir shops to take a look in too.

Now from Notre Dame, take the subway to the Eiffel Tower… what we’ve all really came for. The Eiffel Tower was designed by Gustave Eiffel and is made of wrought iron. It was finished being constructed in 1889, and actually unpopular at first with residents. Did you know Gustave Eiffel also was responsible for The Statue of Liberty? The Tower was the tallest structure in the world until the Empire State Building came along.

You must walk underneath the tower to get a full grasp of how truly monumental it is. If you want to go up to the top by elevator, you probably should book this ahead of time. You also have the option to climb the steps to a certain level. If you have time I certainly recommend this! How many people can say they walked the Eiffel Tower? We did this on our first visit to Paris. It is tiring, but you can go at your own pace.

The Eiffel Tower sits on the Champ de Mars (Field of Mars) which is a large green public space. You can get great views here of the tower. This field will be where the location of the Beach Volleyball Summer Olympics 2024 will be held! 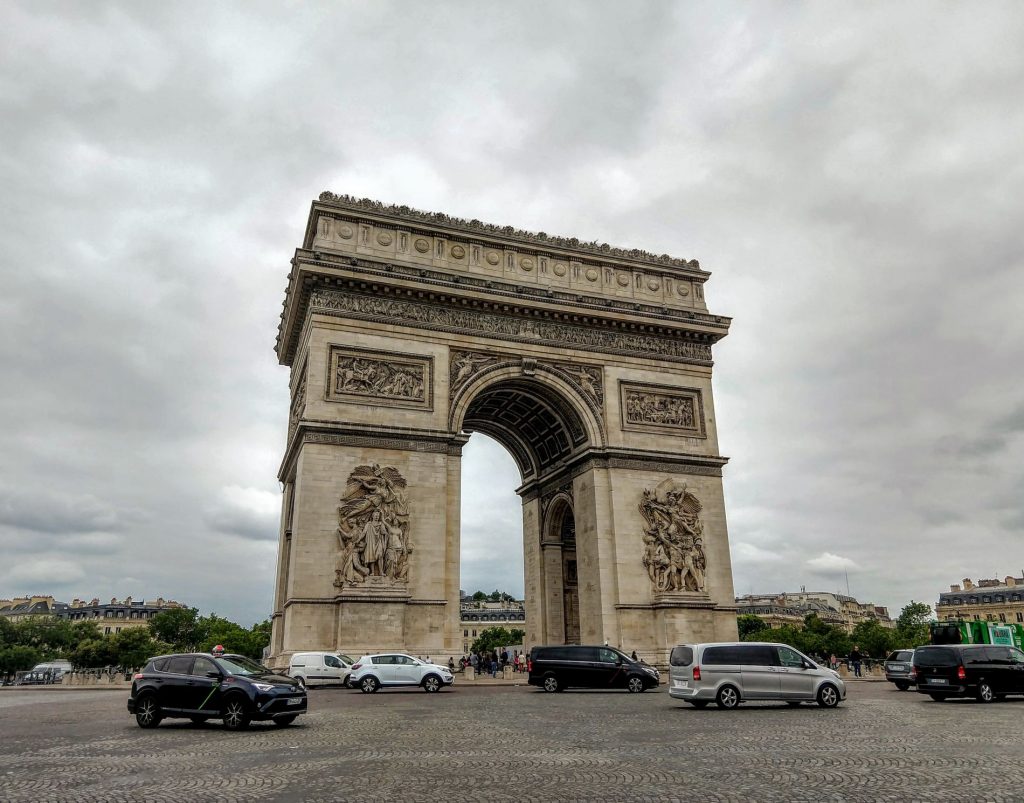 After you’ve had enough of the tower, take a bus down to the Arc de Triomphe (Triumphal Arch). This is a Neoclassical monument in the middle of a roundabout of 12 avenues! Do NOT attempt to cross this road by foot. I don’t even know how its drivers can manage around that thing. There is an underground passageway to get you to the Arch. 🙂 The Arc was built between 1806 and 1836 by order of the Emperor Napoleon  for the Battle of Austerlitz: possibly the greatest victory achieved by Napoleon. The Arc sits right at the end of the Champs-Elysées Avenue.

After getting some nice shots of the Arc, walk down the Avenue des Champs-Élysées. This is one of the most famous avenues in the world and where the Tour de France cycle race finishes. The avenue is full of trees along each side, upscale shopping with monstrous sidewalks for pedestrians.

On this avenue is Ladurée’s: a famous French sweets bakery with one item being the macaroon! There can be a bit of a wait due to the line to take away but we couldn’t leave without getting some. There’s also a restaurant you can eat in now too. With 18 flavors to choose from, our favorite are the Raspberry and Pistachio. Macarons are like a cookie wafer sandwich made with ground almonds and filled with goodness! We have a recipe book for macaroons back home, but haven’t been brave enough to attempt quite yet.

Dinner at a Parisian Cafe

There are loads of cafe’s to choose from. Pick one that suits your taste buds and sit outside facing the street like a Parisian. The idea is to sit back and relax. One of the most popular things to get in France are the steak-frites: steak paired with french fries! Their version of meat and potatoes. *Note – don’t expect the waitstaff to come and check on you unless you call them over. Very different culture than the United States. If you need anything, you just have to ask. We chose a cafe that was outside of the Gare du Nord train station to be able to catch our train back with ease.

Now that you have enjoyed a full day in Paris, it’s time to sit back and have a rest on the train ride back to London. How sweet is it to wake up in London, spend a day in another country and arrive back in the same day!

If you want to see some of our family bloopers while we were in Paris and London, be sure to read our bloopers here!

How would you spend a day in Paris?? Comment and let us know below!

If you are planning a trip anywhere, don’t forget to get travel insurance.