A Day Trip to Stonehenge and Bath

If you are in London, taking a day trip to visit the famous Stonehenge and the original city of Bath, is quite easy. The UK itself is a small island really and it makes for a perfect day out. You technically could drive from the bottom of England, to the top of Scotland, in the same time I could drive from the east coast of North Carolina, to only the next state over, Tennessee. We are slowly trying to tackle the country one region at a time.

There is public transportation that you can take from London, many tour companies that offer day trips, or alternatively you could drive yourself like we did. When I tell people we drove to Stonehenge here, they think 2 hours of driving is far. At home, that’s nothing, because Americans are used to having to drive places. I guess the difference is how great the public transport is here. The reason we drive many places is because my husband is just super awesome, and can totally handle using a stick shift with his left hand, driving on the opposite side of the road, while still managing the roundabouts clockwise. But he did grow up in Brazil, so maybe that explains it. 🙂 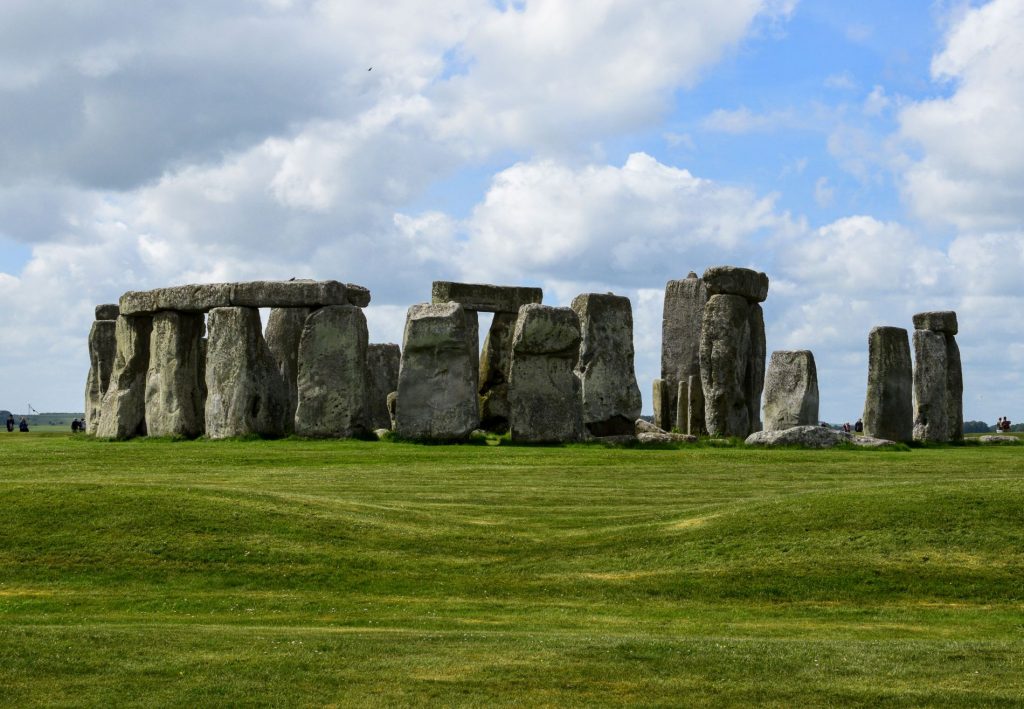 Stonehenge is in the town of Amesbury. It’s literally in the middle of nowhere. Stonehenge is prehistoric and aligned with the movements of sun. As you are driving to the car park, you can see Stonehenge from the road which makes it exciting as you are arriving.

Be sure to book your tickets online in advance because I noticed it costs £4 more a ticket to buy there. But if you are a resident of the UK, it’s really smart to get a National Trust membership for a cheap yearly fee that gives you access to hundreds of places, including Stonehenge. Stonehenge is a part of the English Heritage membership but it’s joined with National Trust so it still gets you in.

As you arrive you can choose to walk through the Exhibition Center and get a little history before you see the stones, or you can do it the other way around. We arrived soon after they opened and chose to see the stones first because we knew it would get busier.

To get to Stonehenge after you’ve arrived at the car park, there is a shuttle bus that drives you down the path a little ways. There is also a walking path if you have plenty of time and want to enjoy the English countryside. We stuck with the bus!

You cannot actually walk between Stonehenge anymore like some previous decades. There is a barrier now, that you can walk all the way around. Before, people would engrave stuff onto the stones, and now it’s under better protection.

There is still a mystery to Stonehenge and how it actually got there. I won’t bore you with all the details though. You must go and visit yourself!

After you’ve had enough time at Stonehenge, hop back in the car and get to Bath! 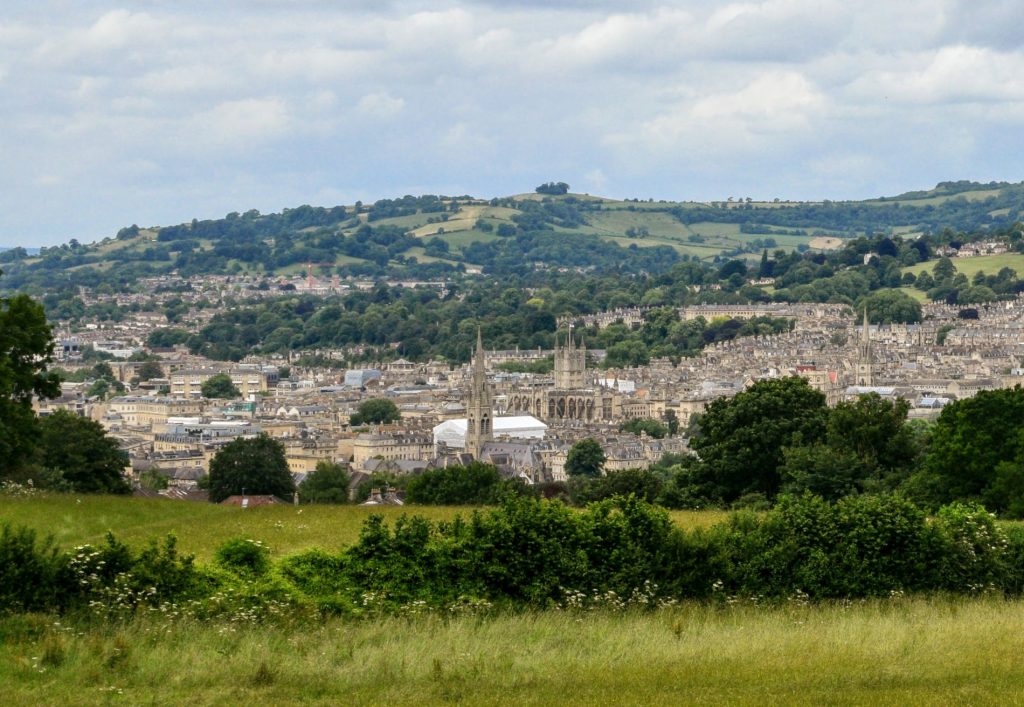 Bath is a city in the southwest of England with an interesting mixture of Roman history from the 1st century AD, and Georgian architecture. Bath is on the World Heritage UNESCO Site list. It was also home for some years to the famous author Jane Austen, best known for her books Sense and Sensibility, and Pride and Prejudice.

Most of the architecture in Bath is built from the bath stone which is a limestone from a mine close by that gives the buildings its warm tan color. The city is just such a cute place to visit. We arrived there right at lunch time and grabbed a bite to eat at a food stand right in the square.

A must-see museum in Bath. The museum is a well-preserved Roman bath house and temple for the goddess Sulis Minerva, constructed in 70 A.D. The water that flows through here is untreated and should not be touched. So, sorry, but no actually jumping in. It’s amazing to be there and try to imagine how it was so many years ago.

It sits on the site of a natural hot spring that still flows through the baths today. You can see the water bubbling in one of the pools. Don’t forget to pick up the audio guide included with your ticket. During the Roman times, Bath was known as Aquae Sulis which means “the waters of Sulis.”

If you are still disappointed about not being able to get in, there is the Thermae Bath Spa nearby, if you fancy a proper spa day.

A church still used today. Entry is free with donations accepted. Go inside and enjoy the vaulted ceilings, stained glass windows and its Gothic architecture. You can see the tower of the church from inside the Roman Baths as well being they are right beside each other. 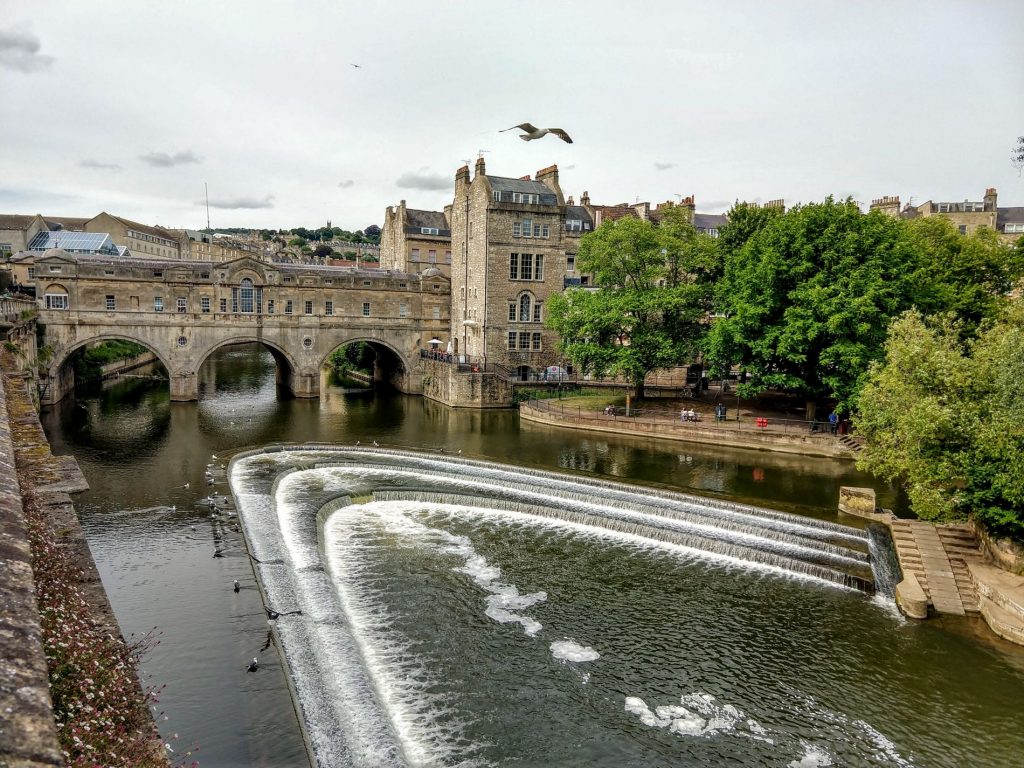 A Georgian bridge built in Bath that crosses over the Avon River. You can see in the photo a horseshoe shaped dam that makes the view beautiful as well. If you’ve watched Les Misérables, the bridge is shown in the film. 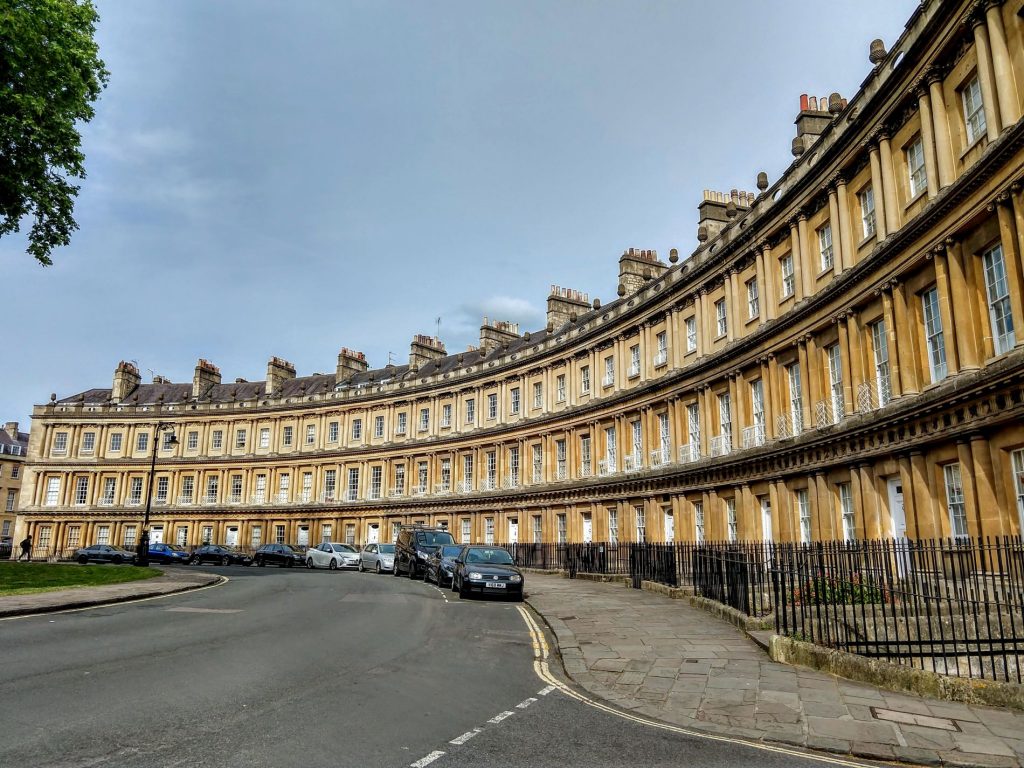 There is a roundabout intersection in Bath with more Georgian houses all the way around following the curves. You cannot capture a picture of the whole thing unless from an aerial view. The name Circus is from Latin meaning circle or ring. Nicholas Cage bought one of the apartments and lived there before! 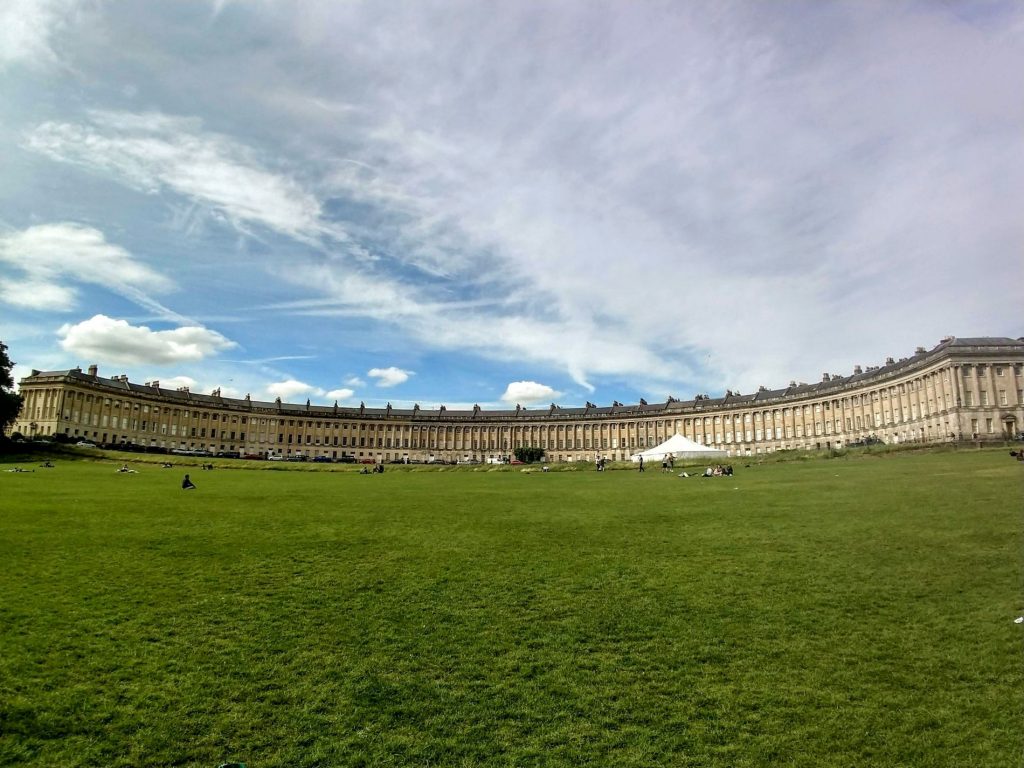 Similar to The Circus, The Royal Crescent is a semi circle of the same Georgian terraced houses, with an incredible green space in front of it. Today it holds a museum, luxury hotel and spa, and some private houses. If you look from an aerial view, The Circus and The Royal Crescent are in the shape of a key. Take a look at a postcard in one of the shops and you can see this.

There is something known as a London Bath Bun in England that is a sweet roll, laced with dried fruits and sugar, but this is not to be confused with the Sally Lunn bun. The Sally Lunn Bath bun is a bigger lighter airy roll, that looks like a big fluffy muffin hamburger bun… or something like that.

We visited the Sally Lunn’s Historic Eating House with a free small kitchen museum downstairs in the cellar. You can have afternoon tea or a dinner here, which we did the latter. Sally Lunn was a refugee escaping France who found work in a kitchen and started making these buns. They are world known today and can be served sweet or savory. We had dinner, then ordered the buns as dessert. They were delicious!

If you enjoyed this day trip post, be sure to check out our day trip to Paris.