A Tourist in Budapest

We were thoroughly impressed with Budapest (hey, that rhymes!). From the beautiful buildings along the massive Danube river, to all the lively restaurants and ruin bars, to an abundance of thermal spas. We spent about 3 full days in Budapest, and we tried as much Hungarian food as possible. On the same trip we also went to Bratislava and Vienna! They are all so close together, it’s hard not to hit all three in one trip.

I wanted to share some major sights to see while in Budapest! It helps to split up your days in sections of the city, because Budapest is rather large. Believe it or not, Buda is on one side of the river and Pest on the other: two places that united in the 1800’s. Buda is all hills which makes for the stunning views of Pest, and Pest is the flatter side that the Parliament building is on. Pest is the more lively night side.

This doesn’t show up on the top tourist sights to hit, but it was the first place we went to when we arrived in the afternoon from Bratislava. It’s a little island in the middle of the Danube River with all kinds of things to do. The island has a hotel, swimming pool, musical fountains, restaurants, and even a mini zoo, to name a few. We rented a 2-seater bike thingy and drove around most of the island in a hour! It was a fun way to start our Budapest trip.

Now THIS is a Parliament building. I mean, it puts London’s Parliament to shame. It’s ginormous and so beautiful. You can’t even get a full picture of it unless you go across the river. It’s the largest building in Hungary. It’s possible to do guided tours when the National Assembly is not in session. We had fun taking sunset and night photos of this place.

3. Shoes on the Danube 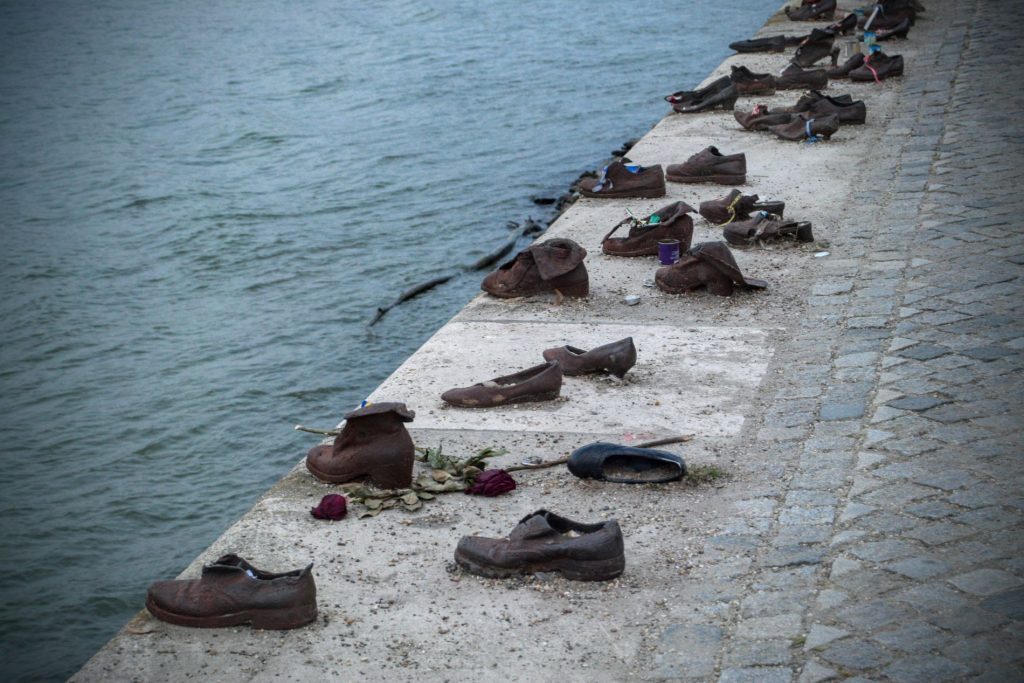 An easy memorial to miss, but moving to see. It’s 60 pairs of iron shoes along the bank of the river, not far from the Parliament building. During the Holocaust, the victims were ordered to take off their clothes, face the edge of the river to be shot, while the river washed their bodies away. Definitely a memorial to see. 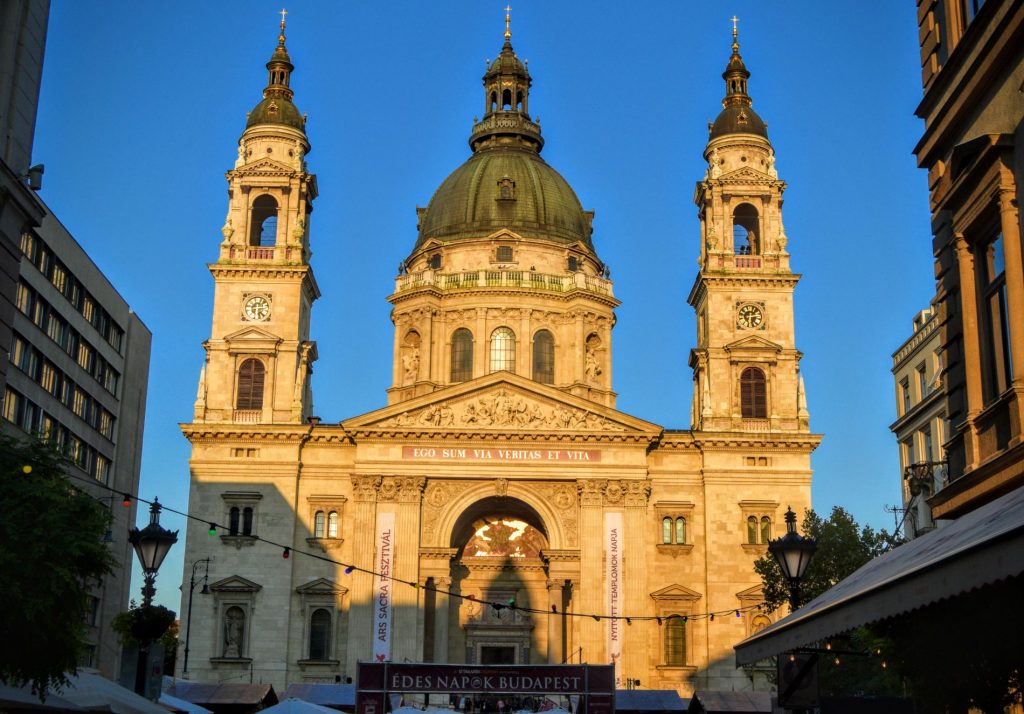 An important Hungarian Neo-classical church with two towers at the front, and a dome. It is the same height as the Parliament building, believe it or not. The weekend we were in Budapest, there was a chocolate festival going on set up in front of the basilica.

A central market on the Pest side of the river, and is the largest indoor market in Budapest. We got some paprika here, because it was cheaper than in the souvenir shops. Paprika is common in Hungarian food. Do take note the market is closed on Sundays though.

6. Liberty Statue and the Citadella

Be ready to hike up the Gellért Hill on the Buda side. The Liberty Statue is a Soviet Monument for “liberating” the people from Nazi control. Communism in Hungary ended in 1989 though. The Citadella is a fortress. Besides having a look at these two pieces, it’s a great lookout to the city from the hill!! 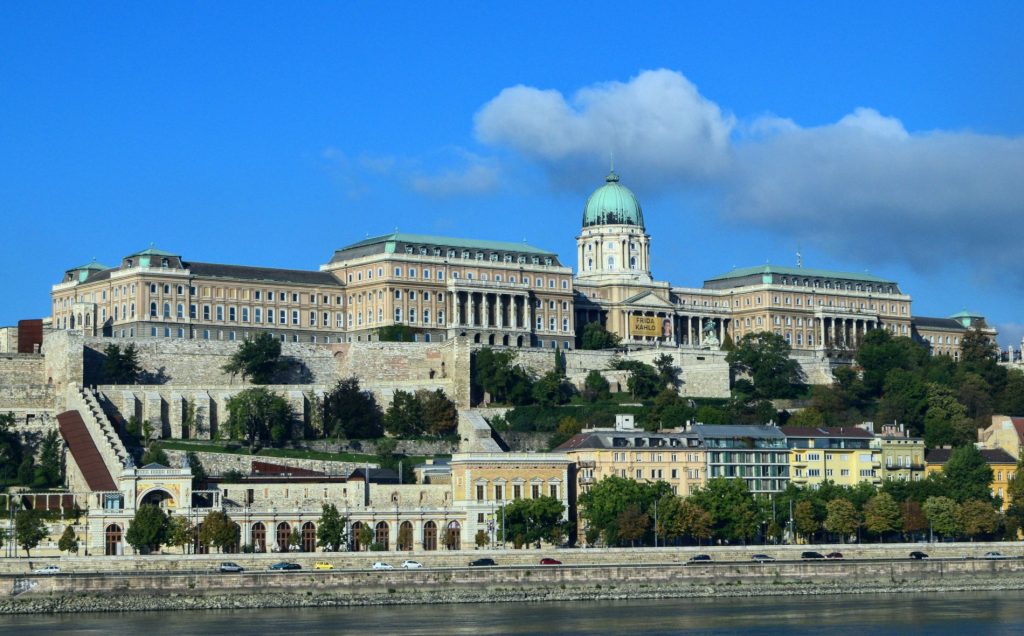 View of the Buda Castle from across the river.

The Buda Castle is on another hill, right next to Gellért Hill. Once a place of royalty to live, today it holds the National Gallery and Budapest History Museum. There is another great view of the city from the top. To get up the hill you can walk as we did, take a bus, or the Buda Hill Funicular which is this steep tram that gets you to the top.

The colored tile roof is what we liked about this place. This church sits right in front of the Fisherman’s Bastion and within walking distance from the Buda Castle, as it sits on the same hill.

This place has a viewing tower that is iconic for most people’s photos, because of the view of the Parliament across the river. It has seven towers for all seven of the Magyar tribes from a long time ago, which later became Hungary. We arrived about noon here and regretted not coming early or late because so many people, all trying to get the same picture.

Budapest has several nicknames, one being the City of Spas. The natural thermal springs were first enjoyed long ago by the Romans, and later newer complexes were built by the Turkish. There are so many baths to choose from, it was so hard to pick just one to visit!

We went to the most popular one which is Szechenyi. This place is like a palace and is one of the largest medicinal baths in Europe. With 18 in and outdoor pools, each have varying temperatures to your liking. It’s fun to try all of them. But don’t worry, everyone must wear a swimsuit and this place is co-ed, so you can go with your significant other to enjoy. If you go on a Saturday night, it’s like a giant pool party.

To avoid crowds, it’s best to go early in the morning. We visited on a Sunday morning about 9AM and stayed for about 3 hours. Like Iceland’s Blue Lagoon, you can stay as long as you like once you enter.

Type in “ruin bar” into Google and nothing but places in Budapest pop up. These ruin bars are set up in places that were formerly abandoned buildings after WWII in the Jewish District.

The first and most notable ruin bar is Szimpla Kert, which a friend of Marvin’s told us about that lives there. It was opened in the early 2000’s. They have used the building and added all kinds of quirky decorations which has become very popular trend! Inside is a courtyard. Seriously visit, it’s like no place you have seen. We went earlier in the day and an all-you-can-eat brunch was being served.

New York Cafe is a cafe (obviously) and hotel. The cafe looks as if you have entered into a royal palace. The inside decoration and architecture is just amazing. You can get classic Hungarian food here as well. We were planning to have lunch or afternoon tea here, but as we didn’t make a reservation ahead of time, we didn’t feel like waiting in line. Just going inside to have a look was enough for us. But if you do stop to eat there, let us know if it was tasty?!

I think another blog will be coming soon on some Hungarian foods we had while here!

Our mantra on this trip was “When I say Buda, you say Pest, Buda…Pest…Buda…Pest.” Marvin wasn’t as enthusiastic as I when it came to me chanting this though! But he still played along.

The only thing we disliked about this place was when we first arrived at the subway station, there was a rough looking guy trying to “help” tourists at the self-service ticket station. We were watching him put the language in his own so the tourist wouldn’t understand, and “help” them purchase their tickets (although there is an English version you can do yourself). In the end, he tries to profit in some way. We heard about the same thing happening in Paris as well.

Is Budapest on your list of places to visit? What did you like about this place if you have been before?