Bloopers from the Family Visit to England

My family just visited from the United States for a little over a week and it was a blast. It was fun getting to show them around, and letting them into how our day to day life is like here in the UK. We’ve been here for about 4 months now. We did manage to fit 5 people into a 1 bedroom apartment, but the more the merrier right?!

We stayed pretty active the whole time and visited London, Paris, Stonehenge, Bath, and Brighton. In total, we walked over 50 miles. We did have 1 day of rest in between it all and the last day we took them to our church, Hillsong in Tonbridge. At times it was seriously like traveling with the Griswolds.

That day of rest we had was Justin sitting with his feet propped up, from getting blisters using his new tennis shoes walking the streets of London!

We did have a few funny incidents during our trip that kept us laughing the whole time. You might find some of them humorous as well!

We wanted to give my family the full British experience, so of course we had tea with scones a number of times. My dad was not so familiar with this food and couldn’t understand why they would call something to eat, “scum,” and thought it was a nasty thing to call them. When we realized what he was calling them, it was then we got the opportunity to correct him. Now all we can think about is a “scum” when we eat these things now!

2. Stopping Passengers to Pick up a Pence. 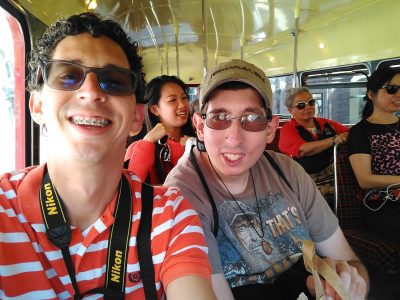 Selfie in the front of the double decker London bus.

My brother Justin was so excited to come and see me, and I still can’t believe he got on a plane to come here with my family. On his list of things he wanted to see in London included riding a red double decker bus. Marvin and Justin got a chance to go to the top and sit in the front, which was great.

One of the days, the bus was pretty crowded and him and Marvin were at the back of the bus. It was time for everyone to exit the bus because we were at the last stop. As soon as Justin gets up, he spots a one pence on the floor, blocks the whole aisle, bends over with no hurry in the world, and picks it up before exiting. There was nothing Marvin could do to hurry him a long because he was after that one pence! Those passengers had to wait for him. We couldn’t help but to laugh about this when we all finally got off.

After a long day exploring London, we were trying to avoid the rush hour crowd out of London, so stopped at an Italian restaurant at the Victoria train station. Our waitress came to the table to get our drink orders. When it came to Justin’s turn he said “I’ll have sweet tea,” with such readiness. (Now sweet tea is a Southern USA drink that hollers diabetes, but soooo good. You brew tea, and keep it refrigerated and adds loads of sugar). We had to explain to him that they didn’t have that kind of sweet tea here. So then his next choice is Diet Mountain Dew which they also didn’t have. The poor waitress is so confused, being English not her first language. Justin finally settled for Diet 7-up. I’m sure he will be ready for some sweet iced tea when he first gets home!

We wandered through London’s Chinatown and Sue Sue spotted this place that had a long line out the door. She figured if the line was that long, it had to be something worth trying. The next day we came back to the same spot because we didn’t want to miss out on this new place called Bubblewrap. It’s like a waffle type bread that’s rolled into a cylinder and filled with all the goodness you can imagine.

Sue Sue had been drooling and anticipating over this dessert the past 24 hours and couldn’t wait to get her hands on it! Marvin and myself shared one, and another one was shared by my dad, Justin and Sue Sue. After about 2 tastes, with all hands on deck digging into theirs, the whole sides of the bubblewrap fell to the ground! Sue Sue’s face told it all. She had the look of disappointment and madness all at the same time. If only we could have captured that look. The pigeons were right there to finish it up though! 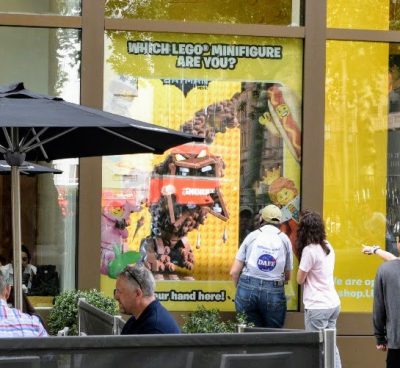 The clayface figure with Justin and myself staring at it.

We were hanging out in Leicester Square in London one afternoon and took a rest right outside the Lego Store. They had a screen on the outside of the building where you scanned your hand and it would analyze which Lego you were. We saw people up there doing it and got ones such as a cowboy, pirate, policeman, etc.

Sue Sue said Justin should go up there and see which one he was. So I walked up there with Justin and got in line. We placed his hand on the scanner and waited while it was analyzing. The image that popped up was this big ugly brown thing, that looked like a tree root or something scary. We just stared at it silent for a couple of seconds, turned around, and started walking away. I looked at Justin and asked “What was that?”, he said “I don’t know… a monster.” To hear him say what he thought it was, was just too funny. We couldn’t believe the image that popped up there after seeing the previous people try it.

The best part, was that Marvin was watching and laughing the whole time and snapped a photo after his figure popped up. We stayed laughing about his Lego the rest of the trip. Later we found out that it was Clayface from the Batman Lego movie.

We took a day trip to Paris by train.  I had been working with Justin as soon as we arrived to Paris, teaching him just a couple of French words in which he was doing really well. I left out how to say “thank you.”

We found a crepe stand and ordered a couple of them. The guy making them handed one to Justin and said “merci”. You could tell the wheels were turning in Justin’s head to think of how to respond… he came out with “gracias.” This was so cute though, he did his best.

What made it funnier though was the next day we watched Mr. Bean’s Holiday which is Mr. Bean taking the same Eurostar train we took to France. Mr. Bean barely speaks in his movies and uses a lot of nonverbal communication. The only French thing he says the whole movie is “oui” which is “yes.” In one of the scenes, a French woman says to Bean that his French is very good, and Bean’s response is “gracias”. We were cracking up about that movie because Justin had done the same thing.

We sat down at a Parisian cafe at the end of our trip there to grab a bite to eat. We all ordered water except Marvin. Our water was brought to us along with our bill. Now this bottle of water was in a glass Evian bottle. Who knew it would be 4.50 Euros…for water! Keep in mind that this is over $5..for a swig of water! And not refillable. We thought we were going to get tap water but this didn’t happen.

One evening everyone was watching the Great British Bake Off on Netflix. Sue Sue couldn’t stop watching the show once she started the first season. Dad is about ready for bed, and he pops out with some kind of saying about Sue Sue baking him some cookies in his best British accent! This caught us all off guard and not something we expected from him! Marvin could not even understand him. We will encourage him to continue with this accent!

After an afternoon exploring the city of Bath, we sat down at the Sally Lunn restaurant, famous for the Sally Lunn Bun. Marvin ordered an espresso at the end while we had dessert. They brought a bowl of sugar cubes to the table for Marvin. We saw dad taking one of the brown sugar cubes and pop it into his mouth. He said he thought they were rock candy and was trying to figure out why they brought them to the table! We had a 2 hour drive home that night from Bath.

Half way through the drive home, dad pulled out some more and was eating them! He stole the rest out of the bowl and put in his front shirt pocket! He likes the sugar cubes ha.

Our last day in London, Sue Sue was trying to get all the souvenir shopping done in one of the shops. Me and dad were just hanging out waiting for them to be finished. We were a distance from the checkout counter, but not too far.

I had to give dad a lesson that day. He asked me what the small square packages were underneath the checkout because they all had different images on them. He noticed one at a British flag and one had a marijuana leaf. So he asks me what they were. I had to ask a couple of different questions just to be sure that he was really asking what the condom packages were! Then he realized and said “Oh.” It was comical. Then he asked Sue Sue if she knew what they were! My dad is a trip.

We were strolling through the public space where the Eiffel Tower was. There were some ladies with clipboards that were in random places that looked like they were there to do a survey. They passed by dad and Marvin, looked at Marvin and asked “Do you speak English?” in which Marvin’s automatic response was “No”. As they passed, dad looked at him kind of funny and they just burst out laughing. Dad was confused and wondering why Marvin said no. We had limited time that day, we couldn’t be stopped for some kind of research or survey! Next time Marvin had better reply back in Portuguese.

If you’ve ever been to Brighton Palace Pier, there are loads of food stands right on the pier. One that we passed by was a fish market truck. Dad always stops by these to compare different types of fish from back home. My parents asked what one of the items was that looked like a sort of small clam or muscle. The guy is trying to explain what it is, when Justin loudly blurts out “Ewww..that’s nasty.” We know the seller was probably not too happy about his announcement for all to hear, as my parents were equally as embarrassed!

Below are a few fun photos of us from the week 🙂

We hope you find our bloopers as funny as we do!! They’ve kept us laughing the whole week. I don’t think Justin will ever come back to London to see us again…he said we wore him out! I guess I can’t blame him after a few blisters and over 50 miles of walking. The whole family were troopers though! They have now left the city and returned back to the familiar country life. Who knows when they will make the trip back over the Atlantic again!

Do you have similar incidents on your family vacations?! Comment below and share your stories with us!