How to Spend 4 Days in Scotland

It’s been 10 months since we’ve moved to England, and we FINALLY made it to Scotland!! I had booked a few days off in a row at work so we could go somewhere to experience some European Christmas markets. Going to Scotland seemed like the perfect place to go and the most budget-friendly transportation wise.

It was still technically autumn while we were there, which was the middle of December, but so close to the winter season that it felt more like winter. One thing to note is the amount of daylight hours at this time of year. The sun was rising around 8:30 AM and setting around 3:30 PM. You really have to plan carefully what you want to see while it’s bright out. We missed some beautiful mountains just because it was already dark by the time we were going to our next accommodation. But don’t let this stop you from traveling to Scotland during this time of year.

Scotland is the country north of England, and part of the United Kingdom. The accents are great and so cool to hear after getting used to the English accent for some time. The people are incredibly friendly as well.

We traveled by Megabus from London to Edinburgh, going and coming. It was 8 hours on the way overnight, and 10 hours during the day on the way back. This isn’t the way most people choose to travel when making the journey. By train and plane is much quicker. But we got bus tickets for only £20 a person, for going and returning. That’s really good!

We rented a car after spending a day in Edinburgh, to drive to Glasgow and through the Highlands. We did quite a bit of driving, but we wouldn’t have changed anything.

I will go through a day by day itinerary on how to spend 4 days in Scotland in (almost) winter. 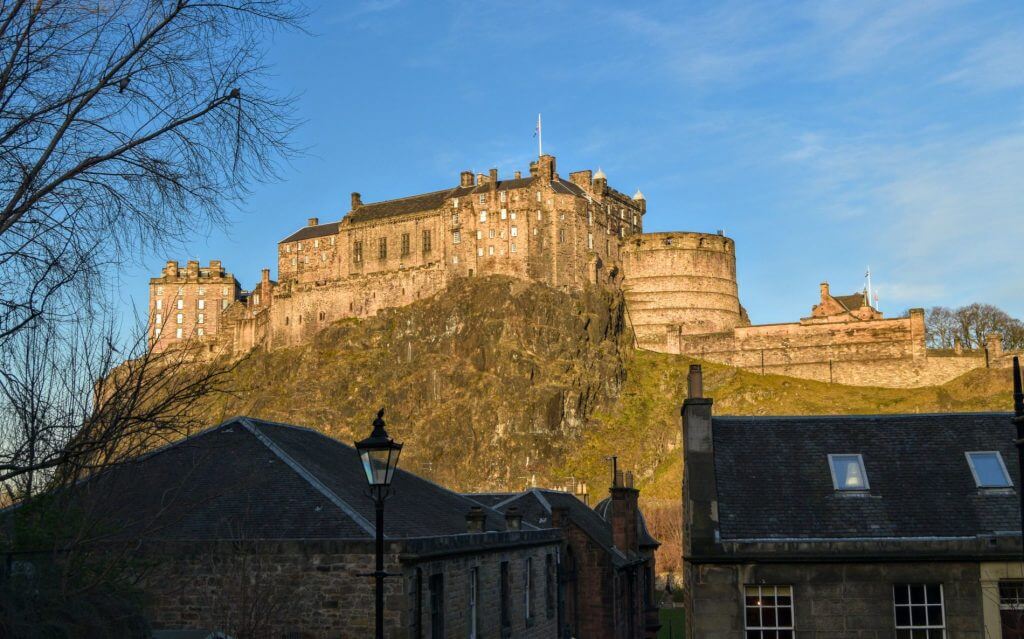 Our bus arrived on the morning of the first day because we took an overnight bus. Luckily, our Airbnb in Edinburgh was available for us to check in as soon as we arrived at 7:30 AM. Otherwise we could have dropped our luggage off at least. By getting there that early, we were really surprised how dark it still was. So our first day was all Edinburgh, seeing the Castle, Royal Mile, Calton Hill with the many monuments, and other things. Check out our full winter day in Edinburgh here! 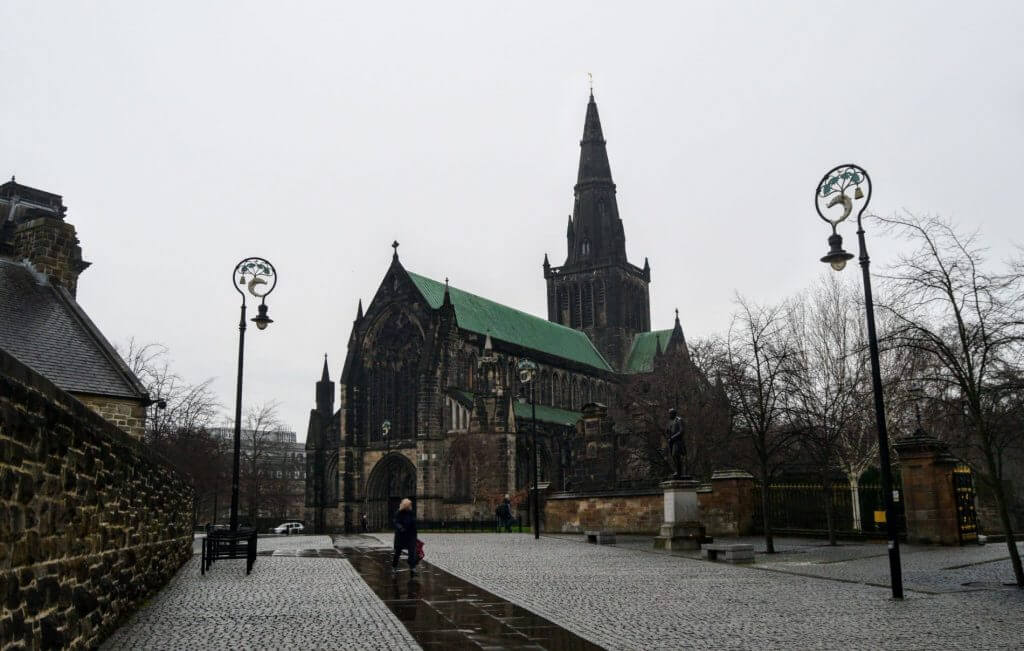 On the second day, we went and picked up our rental car at the main train station (Waverley) in Edinburgh that we had booked ahead of time. From there, it’s only an hour drive to Glasgow. Glasgow is so completely different from Edinburgh, more trendy and historically industrial. It was raining and cold during this day, but we managed to enjoy. There are plenty of museums to go inside and warm up in as well. (A post to come later on a day in Glasgow too.) By the end of the day, we had about a 2.5-hour drive in the dark to our next Airbnb . We stayed in a village called Bonawe, which sat right on Loch Etive. The only problem was, it was snowing in parts along the way, so the drive took almost double the time!

Ben Nevis: We were about an hour driving from Ben Nevis, our first destination of the day. Ben Nevis is the highest mountain in the British Isles. Fort William is the town right at the base of the Grampian Mountain range. We stopped at the Ben Nevis Visitor Centre for some possible easy walking routes. We did a very short walk once it stopped sprinkling, and then drove 3 miles down the road to see a waterfall. The Ben Nevis climb to the top of the mountain is for experienced hikers (not us). The guide told us it was -14 degrees Celsius (6.8 degrees Fahrenheit)  at the top.

Glenfinnan Viaduct: We wanted to see this Viaduct because of the Harry Potter films. It’s in the 2nd movie when Ron and Harry miss the train to Hogwarts, so they take Ron’s dad’s flying car. They catch up to the train and the scene is at this Viaduct. There’s a visitor center to park at (free parking for National Trust members). Ask the guide about the walking routes. One 5-minute walk behind the parking lot gives a view from the front, and a 15-minute walk that leads behind the Viaduct. Both are great. We were here as the sun was setting. On the other side is the Glenfinnan Monument and the beautiful Loch Shiel, which was also used in multiple scenes outside the Hogwarts Castle in the Harry Potter films. From here we drove about 1.5 hours to our next Airbnb which was close to Fort Augustus. 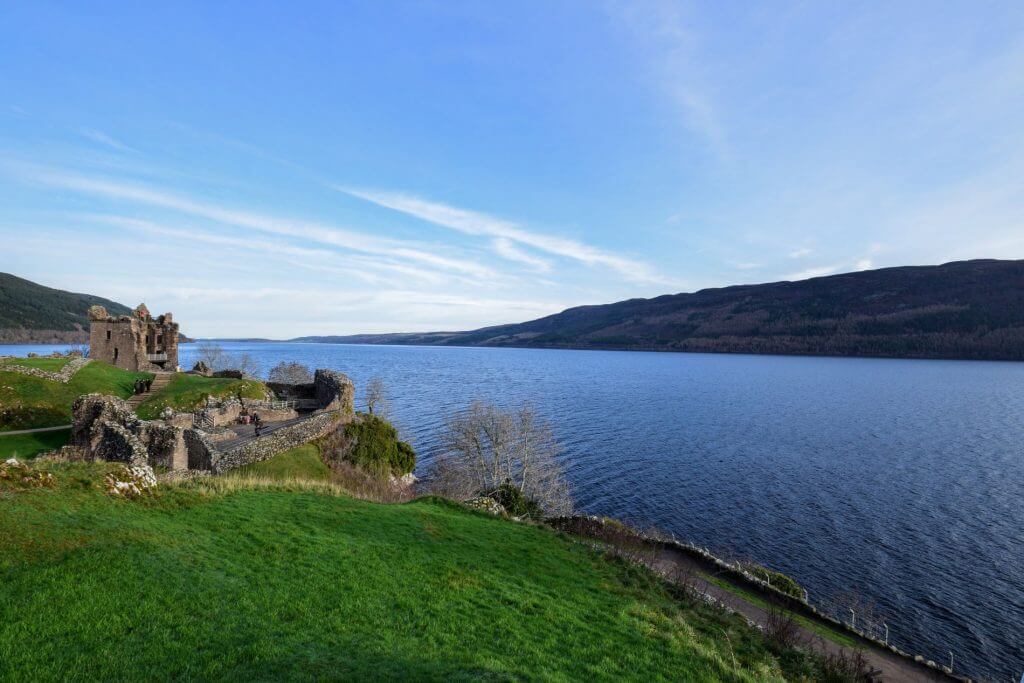 I think everyone knows the legend of the Loch Ness Monster. This was our last day in Scotland. Go to Urquhart Castle: ruins of a castle that sits right on the lake. The castle is magnificent to walk through, and you can even go down to touch the loch (lake). We might have even spotted Nessie!! We spent a lot of time here, enjoying the scenery and had lunch in the cafe on-site.

We stopped by the Loch Ness Exhibition Center, in a small village called Drumnadrochit. You can buy tickets and learn more about the legend. We did not have a lot of time for this, but we did go through the gift shop.

On the way back to Edinburgh for our last night (about 3.5 hours driving from Drumnadrochit), we stopped in Pitlochry, a traditional Scottish village that one of our Airbnb hosts recommended. It was a cute village, and we stopped for coffee and homemade mince pies. On the way back, we also drove through the west side of the Cairngorms National Park, which is gorgeous. Once we got back to Edinburgh, we returned the car to the central station, had one last walk around the capital, and food in the Christmas markets.

Day 5 was spent taking the coach bus back to London.

So How Much Did We Spend?

Find out below! All prices are based on the costs for us as a couple. The Megabus tickets were £20 per person and the castle tickets were £4.50 a person with our discount. The accomodation costs were split 3 ways, because we had a friend traveling with us, so the price listed is for 2 people as well.

We managed to see quite a bit despite the fight against the daylight hours, and the short amount of time. We can’t wait to come back and visit again!!! Maybe the spring or summer next time. There is soooo much more of Scotland to see. There are plenty of tours to book if you don’t prefer driving. Road trips are my favorite though. Probably Scotland and Cornwall have been my favorite places since we moved here so far.

So how would you spend 4 days in Scotland if you had the chance??