On our latest trip, we took a couple of days to explore the capital of Slovakia in between going to Vienna and Budapest. One thing all three of these Europeans capitals have in common is they are all along the Danube River. I love a city based along a river.

Bratislava is a little big city and is easy to walk around to most of the sights in the old town. We felt comfortable because it was so quaint after just leaving the grandiose Vienna. The prices were much better too!

Bratislava has such a diverse history from being under Hungarian control, to the Austro-Hungarian Empire, to formation of Czechoslovakia in 1918 after WWI, becoming occupied by Nazi’s, to being “liberated” by the communist Soviet Union, to finally becoming what it is known today as Slovakia in 1993!  It took me awhile to get this figured out, and there is still so much I missed in-between all of this. What is interesting enough is through all of this change, Slovaks still kept their culture and language.

Before planning our trip here, we weren’t really sure what there was to see. Here’s a list of things to see and do if you are planning a trip there, or just a curious George!

10 Things to See and Do in Bratislava

One of my favorite things about visiting a new place is trying the cultural food! We found this place called Slovak Pub on the recommendation from our Airbnb host. We are so glad they told us about this place because we went there twice! The inside is decorated nicely, and the menu made us come back again to try another Slovakian meal.

The first meal we got was served on a wooden board for 2 people. This included three separate dishes which were bryndzové halušky (dumplings with sheep’s cheese), bryndzové pirohy (Slovakian pierogi which is a special dumpling with sheep’s cheese inside), and kapustou strapačky (dumplings with stewed cabbage). To wash this down with, get the Kofola which is an alternative to Coca-Cola or Pepsi. This is widely popular because it was a substitute during the communist era when these Western brands weren’t as easily available.

On our second visit here, we got the creamy garlic soup in a bread bowl (it’s like a garlic mashed potato soup). If we had time and enough room in our bellies, we would have gotten the cabbage soup also. Guess we will have to save that for next time. 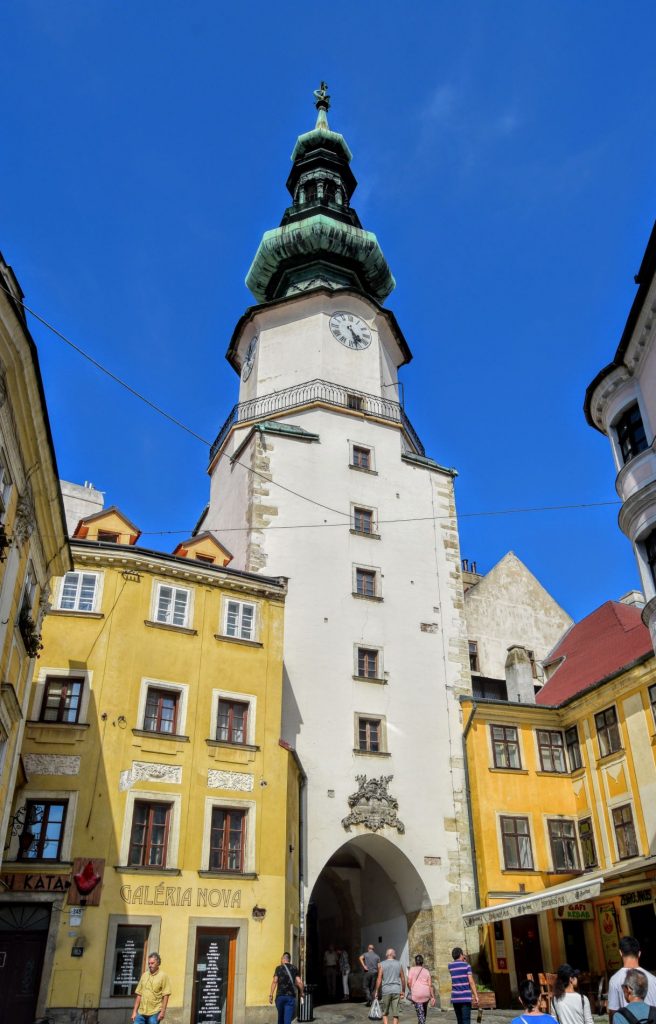 A tower that is the last standing gate into the old town of Bratislava. The street it is on is lined with shops, restaurants, souvenirs stores, and lively with people. At the top of the gate is the Museum of Arms in the Michael’s Tower which has an observation deck as well. 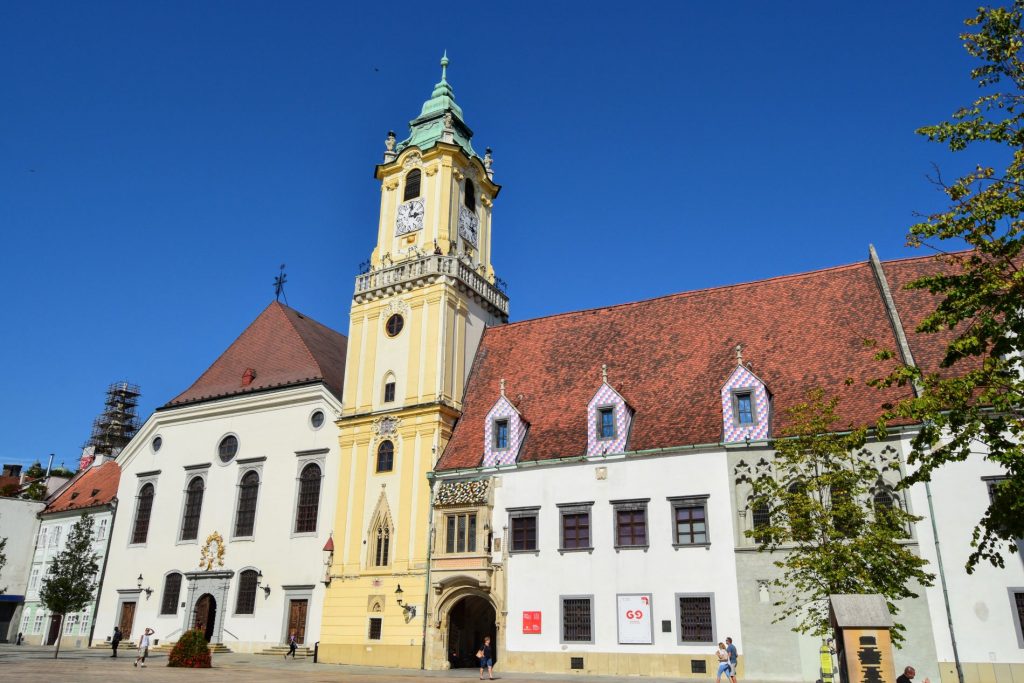 In the heart of the Old Town between the Main Square and Primate’s square, it’s a row of buildings that today holds the Bratislava City Museum.

Cumil aka Man at Work is a statue of a man poking is head and resting out of a sewer hole. You will see him on a lot of the post cards too. Another statue is Schöne Náci after a real person, Ignác Lamár, who is standing waving with his top hat. There are a few other statues scattered around the city as well. 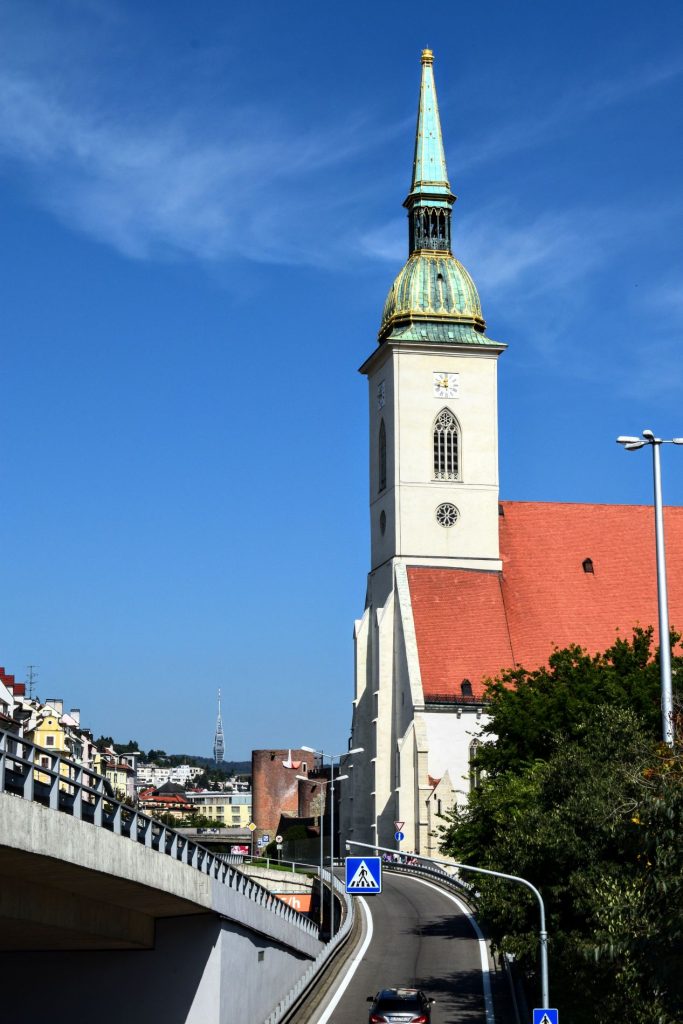 An old church used as the coronation for the Kingdom of the Hungary and very much a part of Bratislava’s skyline.

A castle on a hill above the old town. When you go up the hill to where the castle is, it provides great views of the Danube River and the UFO Bridge. The castle has 4 towers on each corner and was told on a walking tour that people say it looks like a table turned upside down. Can you see that?

A bridge that is iconic of Bratislava today, built in 1972 during the Soviet controlled era. It really does look like a flying alien spaceship. At the top is an observation deck and restaurant. There is a bit of controversy over this bridge being built due to demolishing an entire Jewish quarter to build the road leading to the bridge. We did go up to the open air observation for a few pictures.

Who’s ever seen a blue church? We said it looks like it’s covered in fondant icing because of its round corners and white trimmings. It was built in the early 1900’s and is part of the new Hungarian Secession architecture style. We couldn’t go inside because it was closed at the time, but inside is blue too! 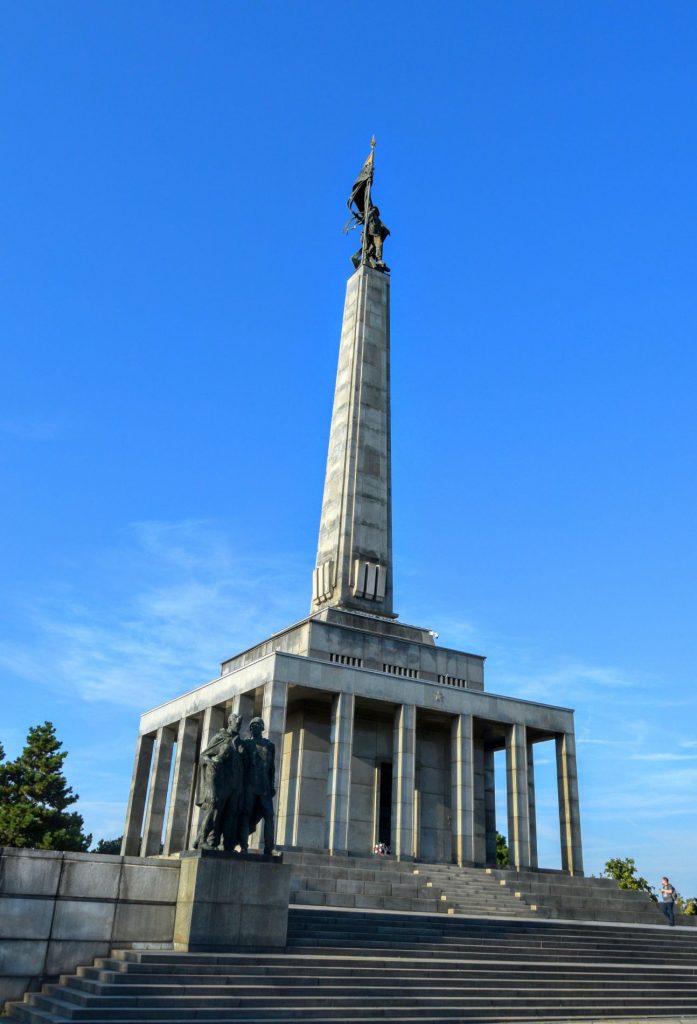 A Soviet Union memorial and cemetery to soldiers of the Soviet Union who died during WWII “liberating” the city from Nazi German control. This is outside the old town and we took a bus to get here with our free walking tour about the 20th century. After we got off the bus on the way to the monument, there is a pretty view of the castle and the old town by the way.

Most cities off free walking tours so we decided we would do one on this visit. We used this company. We did the 20th century tour because we were interested in the recent history through WWII, to the communism era and what life was like. We also did the spooky legends tour with the same guide that night!

How Much We Spent For 2 Days in Bratislava

If you are interested in the breakdown of our costs, here it is below! We try to budget as much as possible.

We used Airbnb for our 2 nights in Bratislava, for $119 we got a studio flat to ourselves within walking distance to the old town!

And can you believe we got a Flixbus from Vienna to Bratislava for only about $8 per ticket?! It’s about an hour journey by bus.

The free walking tour was optional how much we tipped at the end obviously, so that number could change depending on what you felt like it deserved. The 20th century walking tour was 3 hours long and the spooky nighttime one was an hour. Taking the elevator up to the UFO Observation Deck was €7.40 per ticket. The souvenirs are optional too obviously, but that’s the breakdown of the cost for 2 people for 2 days in Bratislava. 🙂

Let us know how much you do or do not enjoy Bratislava by commenting below. What would your ideal spots be in Bratislava?