Amsterdam was a very last minute decision for us to travel to. We literally booked bus tickets and a hotel 2 days before we left! This gave us an exhausting 2 days to explore Amsterdam, a city we knew we wanted to visit for some time, but hadn’t made it a priority. So we bit the bullet when I had some time off and went for it.

We did an absolutely crazy thing and took night buses going and coming. I maybe wouldn’t recommend this unless you are as mad as us. But we sure did save some money! We took an overnight Flixbus from London to Amsterdam on a Thursday night and arrived by 10AM on the Friday morning. One night stay in a hotel, then we took a Flixbus back home on the Saturday night, arriving back to London Sunday morning!

Two days in Amsterdam is enough to get a taste of the city, depending on how many museums you are into going to. We’ve created an itinerary you can follow, no matter what transportation you get to arrive there!

A Bit About Amsterdam

What’s the difference between a coffee shop and a cafe?

If you want to have a cup of coffee, go to a cafe. If you want to buy and smoke weed, this is what a coffee shop is for, with about 200 in the city and a majority of them in the Red Light District. Cannabis isn’t actually legal in the Netherlands, but somehow they have worked out this recreational policy of tolerance which is a bit confusing.

Since we had to carry around our belongings both days, we packed extremely light. We each had a backpack and that was it. 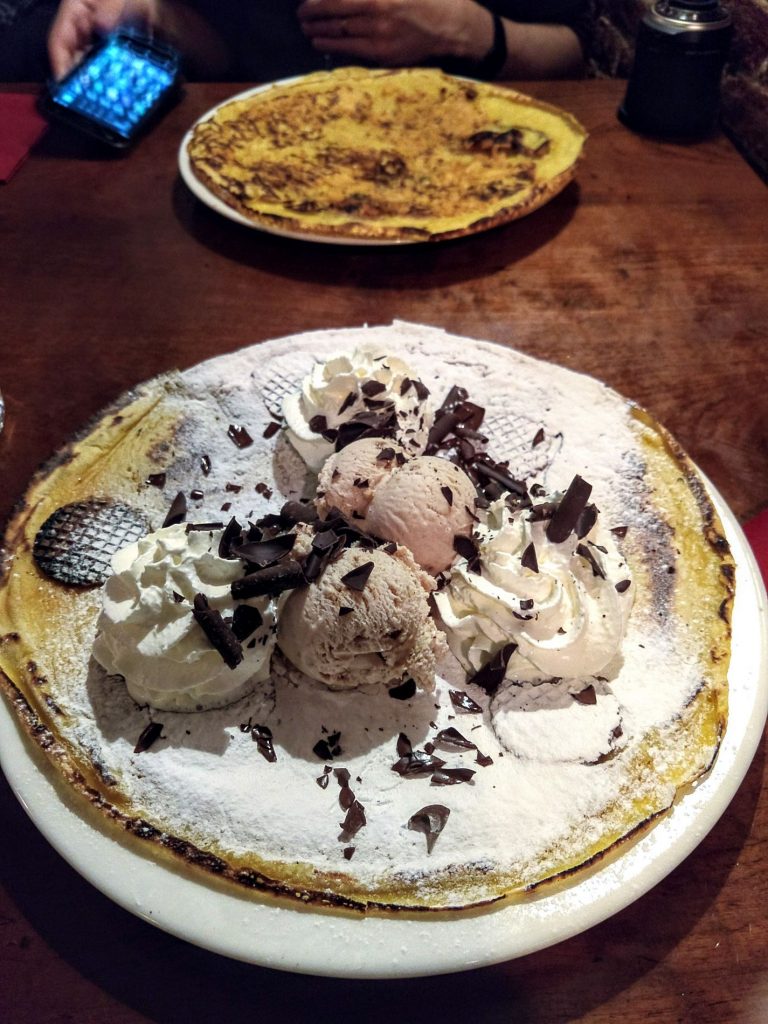 After our overnight bus ride (which we did manage to sleep), we wanted to start the day off right with brunch! A Dutch Pancake is a large pancake that’s thinner than an American one, but thicker than a crepe. Ingredients can be actually cooked into the pancake itself! Marvin picked a savory one which included bacon and apples into it! I chose the sweet one with stroopwafels, whip cream, chocolate shavings and cinnamon ice cream! We ended up splitting each so we could enjoy both.

There are many places to order Dutch Pancakes from, but we went to The Pancake Bakery and weren’t disappointed.

After getting our bellies full, I booked online for a free walking tour (did that during the pancake feast!) The meeting point was at the National Monument at Dam Square, which already knocked a sight off our list. We really learned about some interesting information and was a great introduction to the canals, the purposefully leaning 17th-century buildings, and the liberal society. The tour lasted about 2 ½ – 3 hours. We went with this company. Of course the tour is free, but tip your guide on what you think it’s worth.

Walk or Bike Around the Many Canals

After the tour we just walked around some more to take iconic photos of the canals. We managed to go by the floating flower market also known as Bloemenmarkt. If you want to rent a bike to see the city, this is a popular way to get around. Seriously, watch out for the bikes. 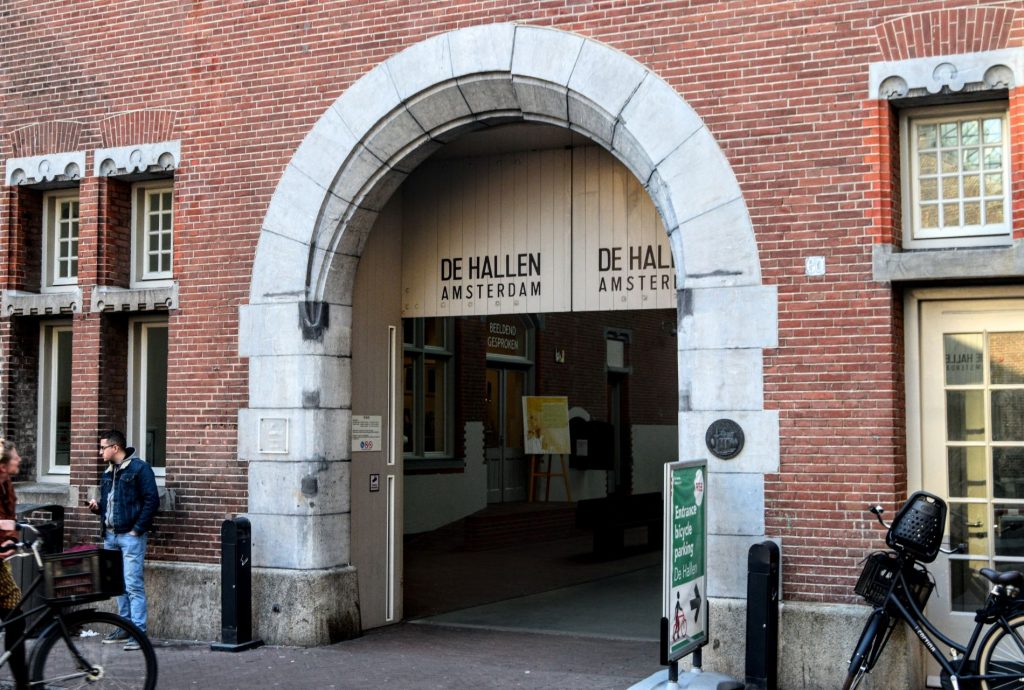 We wanted to try this food hall even though there weren’t many traditional Dutch options. If you want a good meal with lots of options, it’s a great place to check out and grab some grub!

After a good night rest, we packed more into Day 2 than the first one. 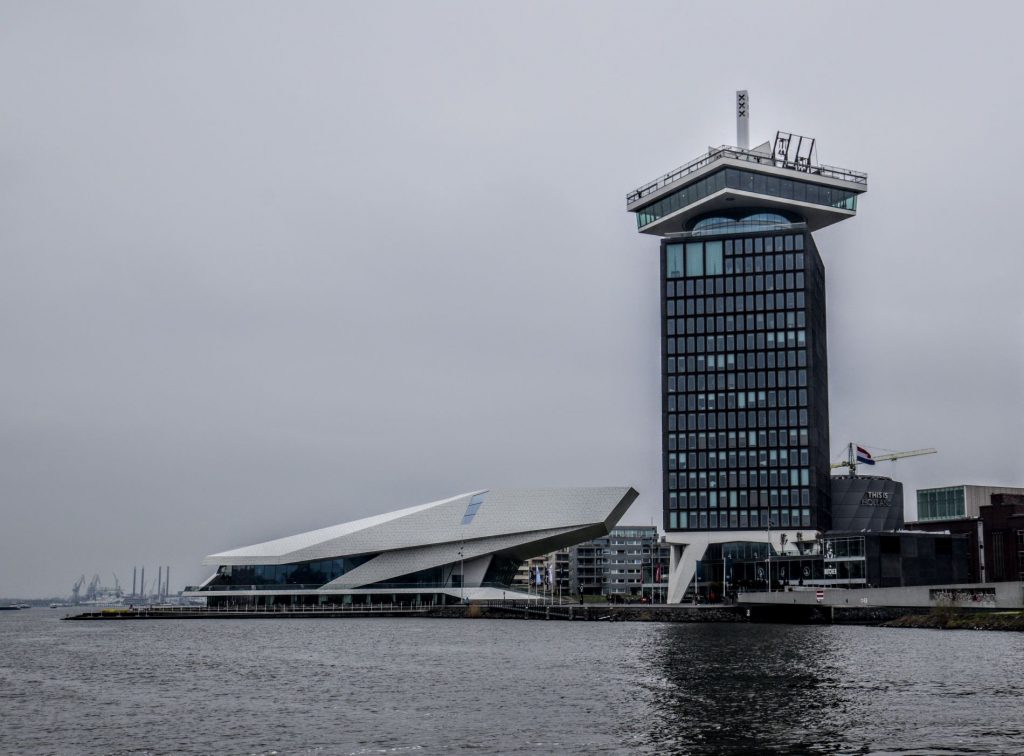 The A’dam Lookout and the Eye Film Institute buildings from the free ferry ride.

Since our hotel was north of the river, we took a train to the central station. Then we took one of the free ferrys to go back across the river for a view of the A’dam Lookout tower next to the unique designed Eye Film Institute building. If you fancy going up to the Tower, go for it! You can swing “over the edge” in Europe’s highest swing if you are a thrill seeker! 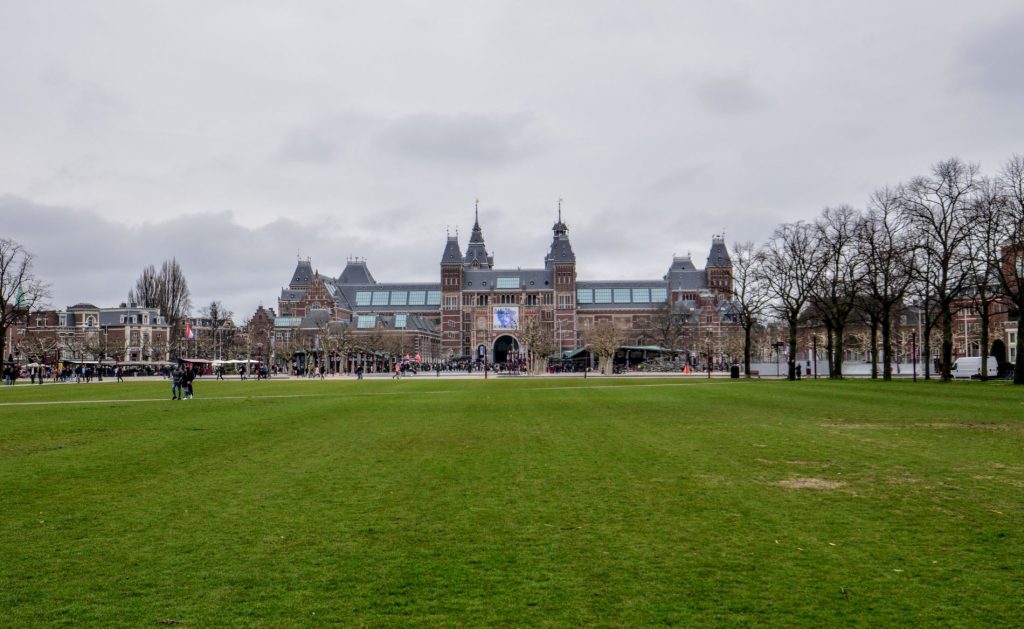 The Rijksmuseum inside Museum Square

If you want to check out some of the museums Amsterdam has to offer, many of them can be found in this cool area, also known as Museumplein. The 3 major museums here are the Rijksmuseum (Dutch arts and history), the Van Gogh museum, and the Stedelijk museum (modern arts). To avoid long lines, it’s good to book your tickets in advance. The “I amsterdam” in red letters sign used to be in this square, before the city decided to remove it at the end of 2018 due to mass tourism. Who knows if they will bring them back. 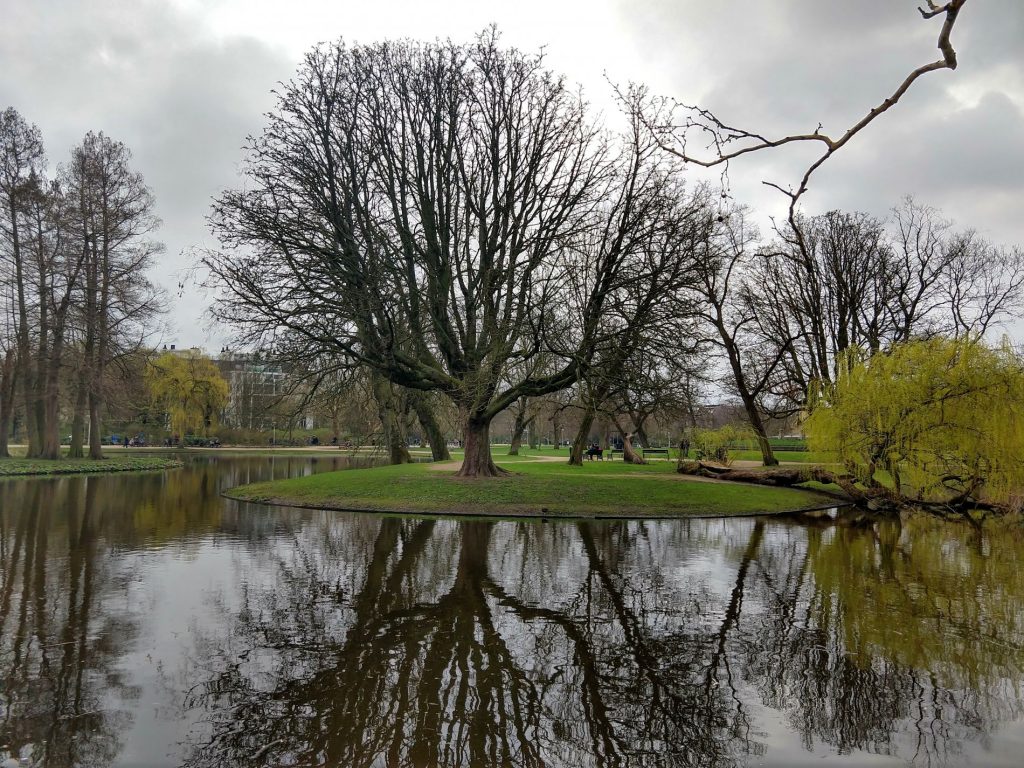 Vondelpark is located right next to the Museum Square and is the largest park in Amsterdam at 120 acres! We did a quick stroll through and relaxed for a few minutes on one of the benches.

Stroopwafel and raw herring at the Albert Cuyp Market

Albert Cuyp Market is a street market, and the largest daytime market in Europe. The stands go on and on, both sides of the street. We almost didn’t go check this place out, but it is not to be missed. The best part was getting a freshly made Stroopwafel (syrup waffle), which is a dessert from the Netherlands. It consists of a waffle baked and while still warm, split in 2 and filled with a syrup and placed together like a cookie! Plus the price of one here was €1.50 compared to €4.50 in the city center!

I skipped this part, but Marvin also tried another Dutch dish which is raw herring. Around the city you will see food carts selling the same thing. He said he liked it. 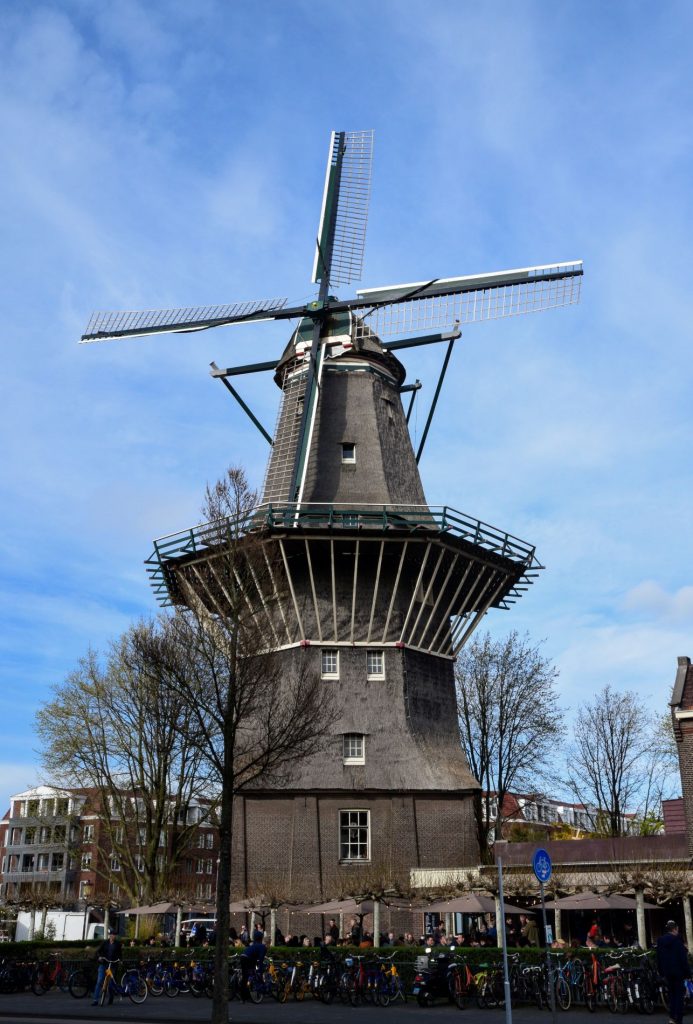 De Gooyer Windmill is the tallest wooden windmill in the Netherlands, once serving as a flour mill. It sits right beside the Brouwerij ‘t IJ brewery.

The rest of the day we just spent walking around the canals again, having dinner and another (more expensive) stroopwafel before catching our bus back to London!

How Much We Spent?

Bear in mind this was a last minute planning! There are probably better priced accommodation, and closer to the central part if you book more than 2 days in advance. Spring had just started when we made it to Amsterdam.

If you want to go to the Anne Frank House Museum – you must book months in advance. There are a certain number that they give out on the day of, but you must arrive early to be in line. Since we only planned our trip 2 days before, this obviously didn’t work out for us.

Our visit was a quick one, but we are still happy we went. We would love to return to the Netherlands to check out what else it has to offer.

We’d love to hear how you would spend 2 days in Amsterdam, so feel free to comment below!