How to Spend 3 Days in Copenhagen

Traveling to Copenhagen for a short getaway is the perfect destination. We spent a total of 4 days, which includes the days we were flying due to early and late flights. Three of these days were spent in Copenhagen and one half day trip to Malmo, Sweden. Our last day in Copenhagen was just spent re-exploring some sights and eating lots of Danish cuisine! I think it’s important to have an extra free day on trips sometimes because you never know how the weather is going to be. We had 3 sunny days and one cloudy day which we were super fortunate. We are all about short affordable budget trips, so we’ve created a 3-day Copenhagen itinerary with a breakdown of our spendings as well.

Going to Copenhagen felt like a real vacation for us, even if we didn’t relax by a pool or whatever. Maybe because it’s winter or because Copenhagen has a big little city feel, but we slept in every morning, and weren’t out late during the evenings, yet we felt like we had the perfect amount of time. It was about mid-morning every day before we got started!

Copenhagen is the capital of Denmark and surrounded by the North and Baltic Sea. Copenhagen faces the east on the Baltic Sea. To be in Scandinavia, it’s not as far north as you might think, but pretty close to the northern part of Germany.

Getting into the City from the Airport

A market with food and fresh seafood. We came here a total of 3 times during our stay! If you are looking for a good cappuccino or espresso, go to the Coffee Collective here!

The Round Tower and views

Cheap price to go up the tower. The walk up is pretty interesting – a spiraling cobblestone floor – and leads you to the observatory at the very top. Inside the tower is hollow. For the price, it was worth going up, but if you want one view not to miss, go to the Church of Our Saviour and climb that tower.

We thought this castle looked more like a church when we came upon, but still pretty! Today it holds the crown jewels and a museum. The royal family does not live here. We didn’t go inside but if you fancy, go for it! Nearby to the castle are the Botanical Gardens to walk through.

This is probably the most touristy spot in Copenhagen. It’s definitely gorgeous with all the colorful houses with sailboats and the reflection in the water. We enjoyed going there during a week day vs. weekend due to the amount of people. To get a beautiful shot if it, go around mid-day while the sun is shining on the buildings, and before sunset when it’s not too dark. 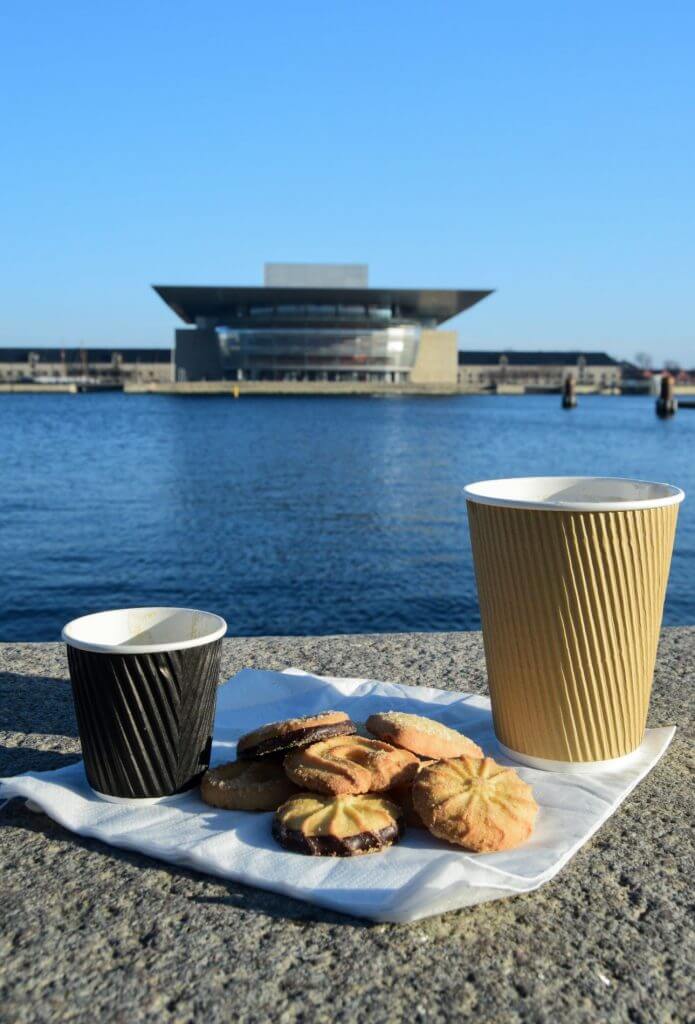 After seeing Nyhavn, we made our way down the waterfront, and opposite from us we could see the interesting architecture of the opera house. We never went inside though. There were miniature coffee trucks around the city, and we got coffees from this area to enjoy the water and view with some Danish cookies. The weather was too nice not to. 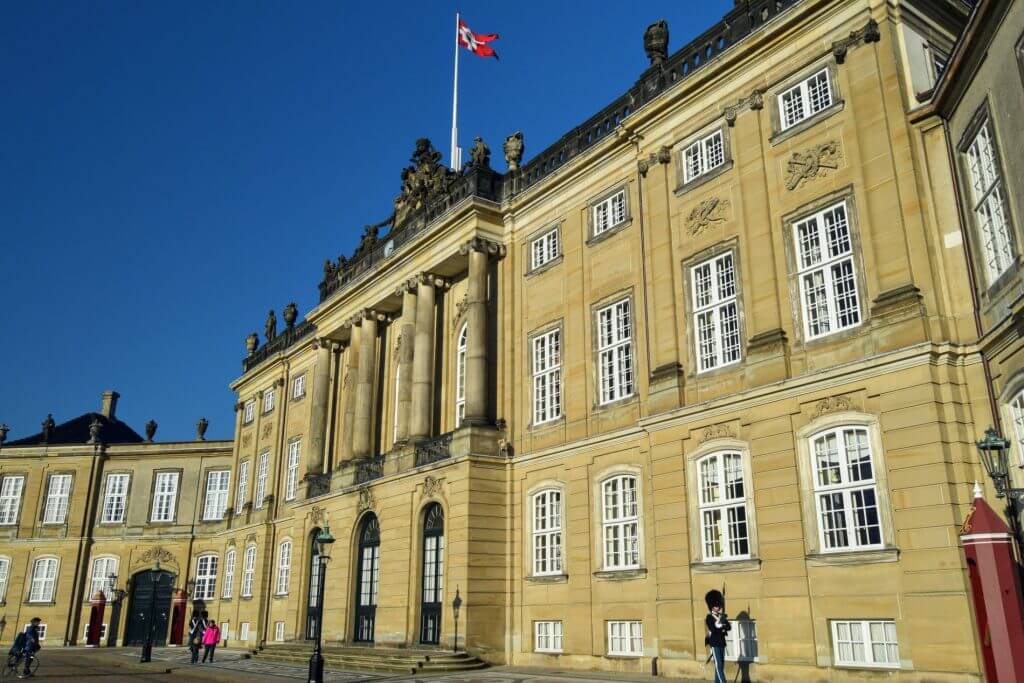 Where the royal Danish family reside. You will see guards marching around, which is where the changing of the guards occurs daily. 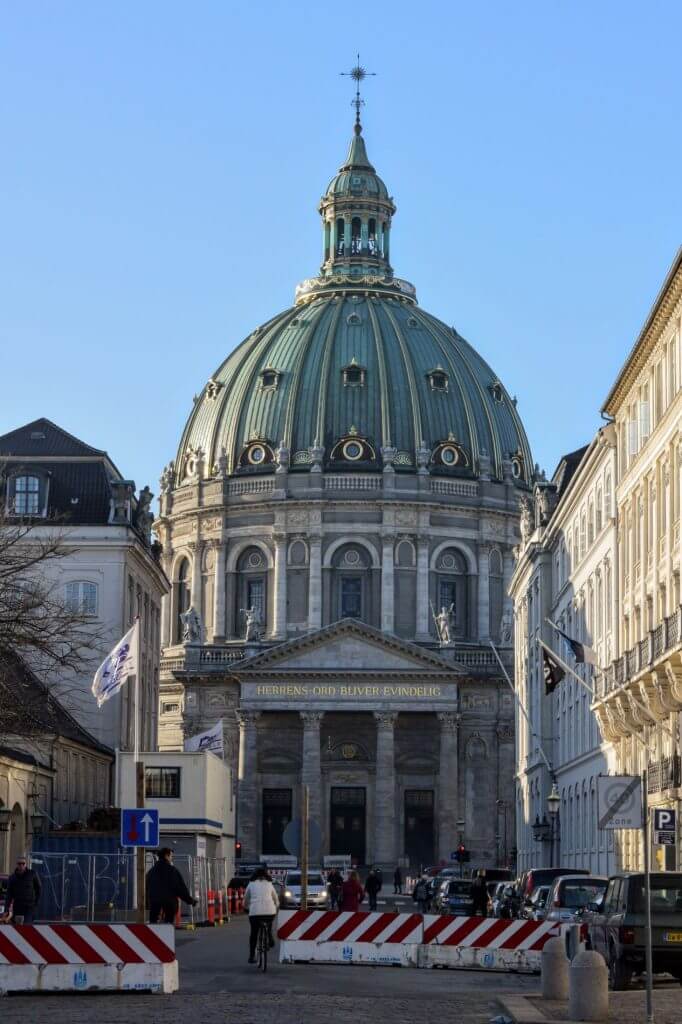 Known as the Marble Church, it has a pretty copper green dome! In certain days and times of the year, you can pay to access for a view from the dome.

This area is in the shape of a star if you look from above! There you’ll find a fortress with several buildings inside, including red barracks, and it’s surrounded by grassy mounds in the shape of a star (techinically a pentagon) and a moat. Many people do the trail around the top. Don’t miss out on the old windmill. The red bottom matching the barracks was so pretty to me.

Not far from Kastellet, go to the water and find the statue in the water upon the rocks. You can’t miss it, just look for the crowd of people. The statue is pretty small, but The Little Mermaid is a fairy tale written by Hans Christian Andersen, a Danish writer. Growing up on The Little Mermaid Disney film as a child, I never knew it was a written tale from Denmark.

Cool building in a square. Didn’t spend much time here besides walking by it but still notable to mention. I read you can go inside and see the hall for free. 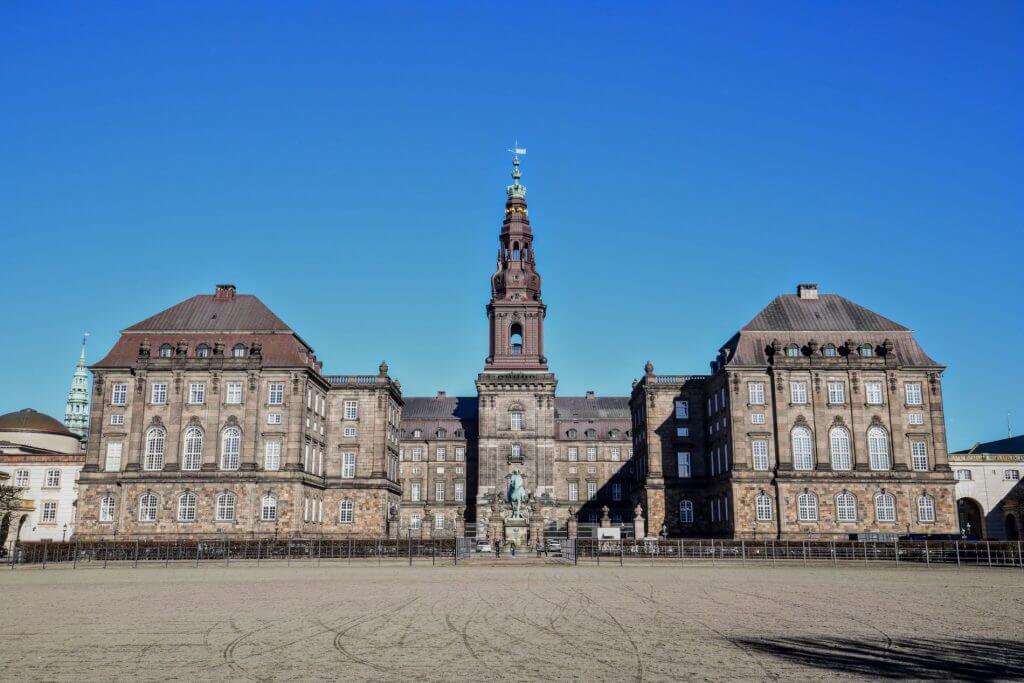 Another palace, didn’t spend any time here either but it’s also nice to see. It holds the Parliament, Supreme Court, and the Prime Minister’s Office.

Called The Black Diamond, the building face is made with a black glass front, facing the water. We went inside just to see an open view from the top floor. There are public toilets and a cafe inside if you need a break too!

Church of our Saviour

Church of Our Saviour

This church is in baroque style. One of the favorite things we did here was go up to bell tower. It doesn’t cost much but it is 400 steps in total! Our calves were feeling it the rest of the trip! Some gorgeous views over Copenhagen. Seriously go up. The tower is closed during rain and snow because part of it is outside and it could be dangerous with slippery steps and strong winds. About half-way between the steps is a short video explaining the history of the church.

This place is so interesting and a controversial topic. It’s an independent district/society within Copenhagen which first started in the 70’s and still holds on to that feel today. The area is open to public and even guided tours are available by its own residents, but it’s advised to follow by their rules, which includes no pictures. Openly selling green stuff (but ban the “hard drugs”), this place has a nickname as The Green Light District. We felt out of place, but not unsafe. The exit saying “you are now entering the EU” was pretty interesting.

Apparently this is the longest pedestrian street in the world. stork fountain, lego store: this was the main shopping street. You will find the Stork Fountain in the square,  street musicians, hot dog stands, and don’t forget the Lego store to see the lego version of the Nyhavn houses! 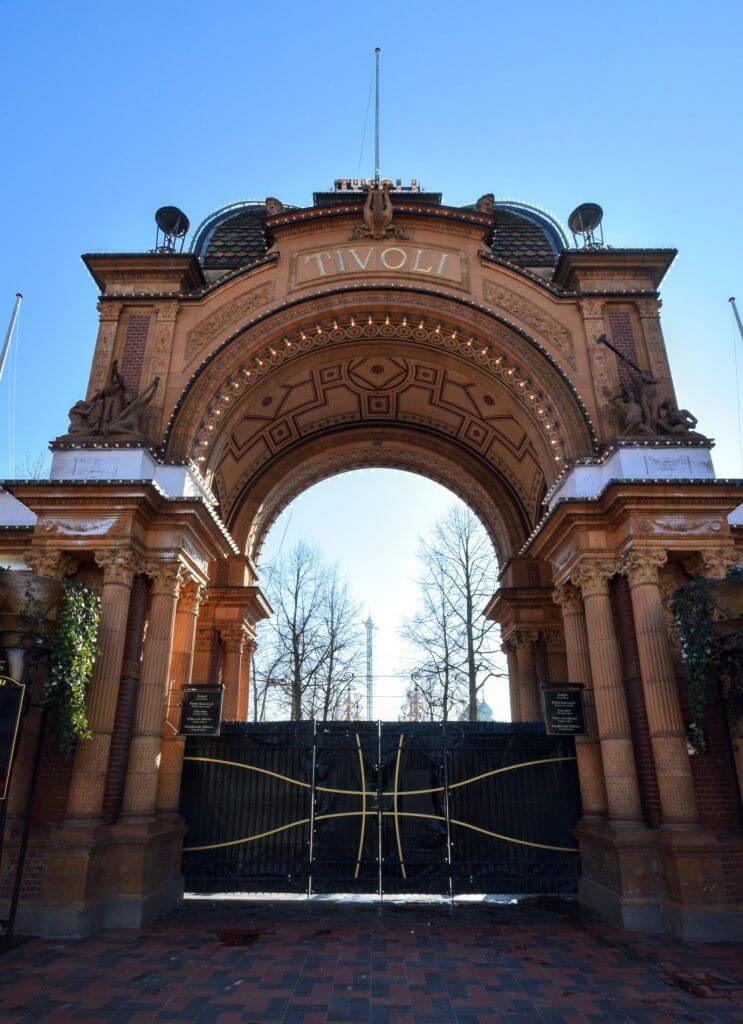 This is a really old amusement park (opened in 1843!), which was unfortunately closed during parts of the winter, so we didn’t have the opportunity to go in. But a fun fact is, Walt Disney got inspiration from this park when he created Disney World! Inside is a replica of the Taj Mahal. From what I read, it’s nice to go here in the evenings for the lights. It does cost to enter, and extra for the rides.

Half Day Trip to Malmo 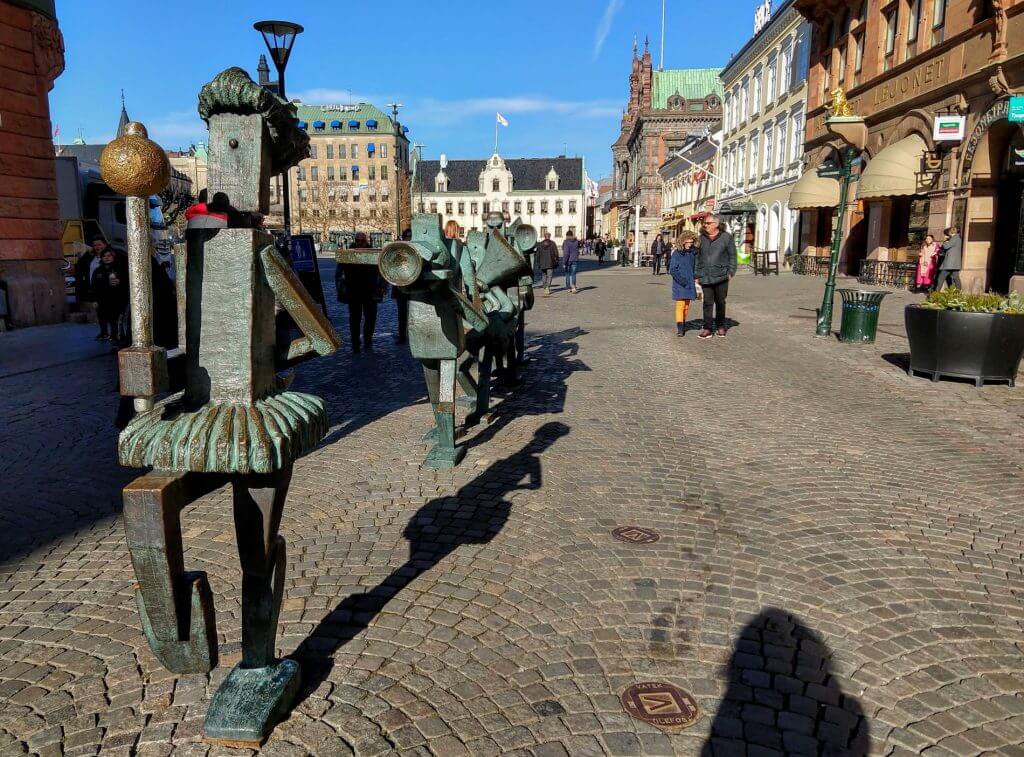 We spent a half day taking a trip to Malmo, Sweden. With only a 30 minute train ride into another country, it was hard to pass up checking off another Swedish city on our list. (Check out how to spend a weekend getaway in Stockholm here). Four hours walking Sweden’s 3rd biggest city was sufficient for us! A day trip to Malmo post will be coming soon. Since you are entering another country, it is important to be carrying your passport with you on this day. The sights we covered were the Stortorget square, St. Peter’s Church, Castle Mill, Malmö Castle, Turning Torso, and the Lilla Torg (little square). The train station gets you right into the center of the main sights!

We got the train back in time to enjoy a dinner back in Copenhagen. 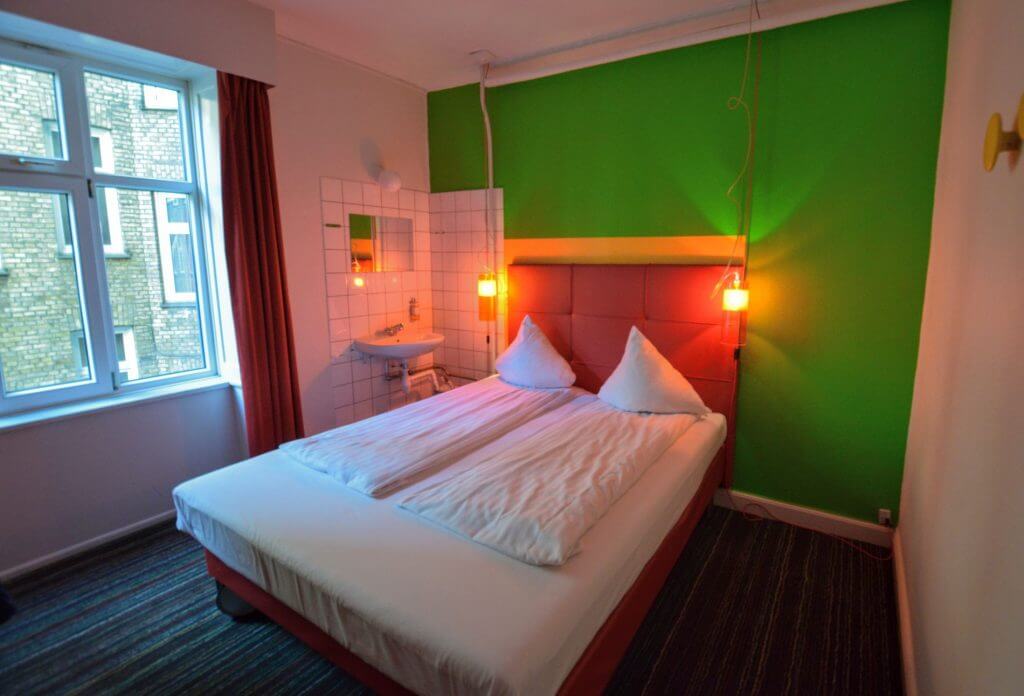 We stayed at the Annex Copenhagen, a budget hotel inside of a fancier hotel that shares a lobby. It was very comfortable. We had a sink inside our room and down the hall were the showers and toilets in separate rooms. The enclosed bathrooms made it more private without feeling like you are in summer camp or college dormitory. The room had everything we needed and really close to the central train station and lots of cafes and restaurants. Check out boooking.com for accomodation that fits your needs. I alway check this and Airbnb, but the price for being close to the city center worked out better getting a budget hotel this particular time.

Other Places of Interest for Tourists in Copenhagen:

Where to Eat Danish Food

We did everything we wanted to do in these 3 days. Our last day when we flew back, we walked around and ate! We tried to stay away from the touristy traps, to save money. It’s best to try to eat where the locals are!

Smørrebrød is an open-face sandwich originating in Denmark. Starting with a slice of rye bread usually and made with different toppings. A typical “manly” one is tartar which is seasoned raw steak. Other varieties include smoked salmon, chicken salad, potatoes and bacon. We recommend Mad & Kaffe in Vesterbro district. The menu had few options, mainly sandwiches, but it was packed with the locals. This is a common lunch dish in Denmark.  We sat across from 2 Danish guys when we were having fish cakes in the market, and a trick they did was buy their bread and fried fish separately and made their own open face sandwich which ended up being cheaper!

These were delicious! Topped with fresh onions, crispy fried onions and a remoulade.You can find hotdog stands all over the city. If you want to sit down somewhere though, definitely go to John’s Hotdog Deli in the old Meat Packing District. You order your food, and when your French fries are done, you choose from 4 different types of hot dogs. I got Italian cheese and Marvin tried the boar with mushrooms and another type of garlic one. Topped with the usual Danish onions and remoulade, plus a buffet of other toppings of your choice. One of the best hotdogs ever. Go there!

This district we found the most cool. It has retained the look of the butchering buildings. But now the buildings are used for all kinds of restaurants and less of the meat industry. Other types of shops like clothing, and specific niches can be found too. We had hotdogs two night in a row here! Plus it wasn’t too far from our hotel. 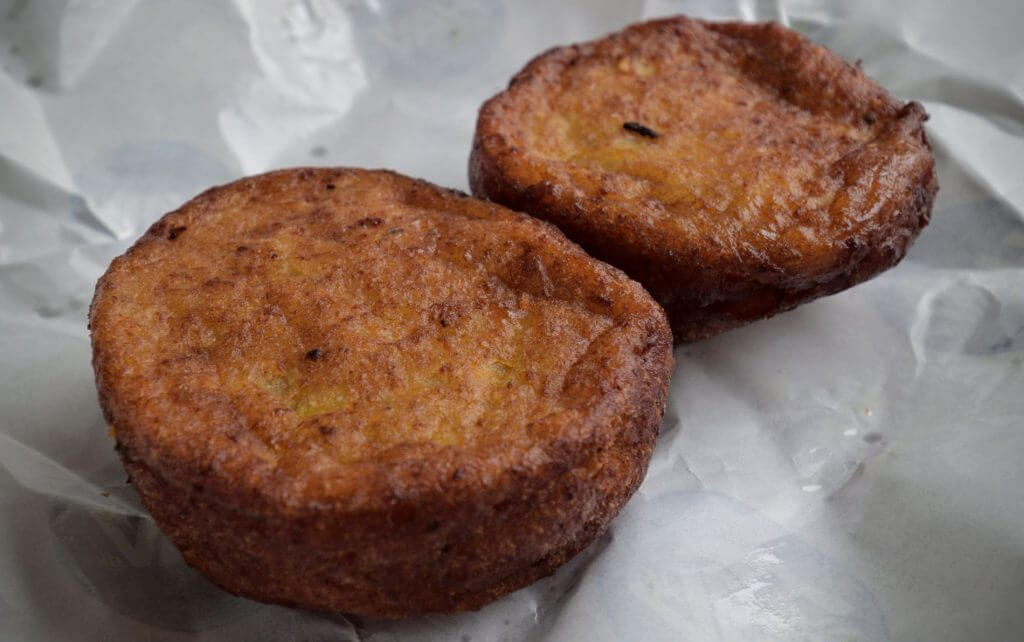 Denmark has their own style of fish cake – overall, the Nordic countries are known for their seafood. The Torvehallerne market had a few places selling fish cakes and we went with Hav. 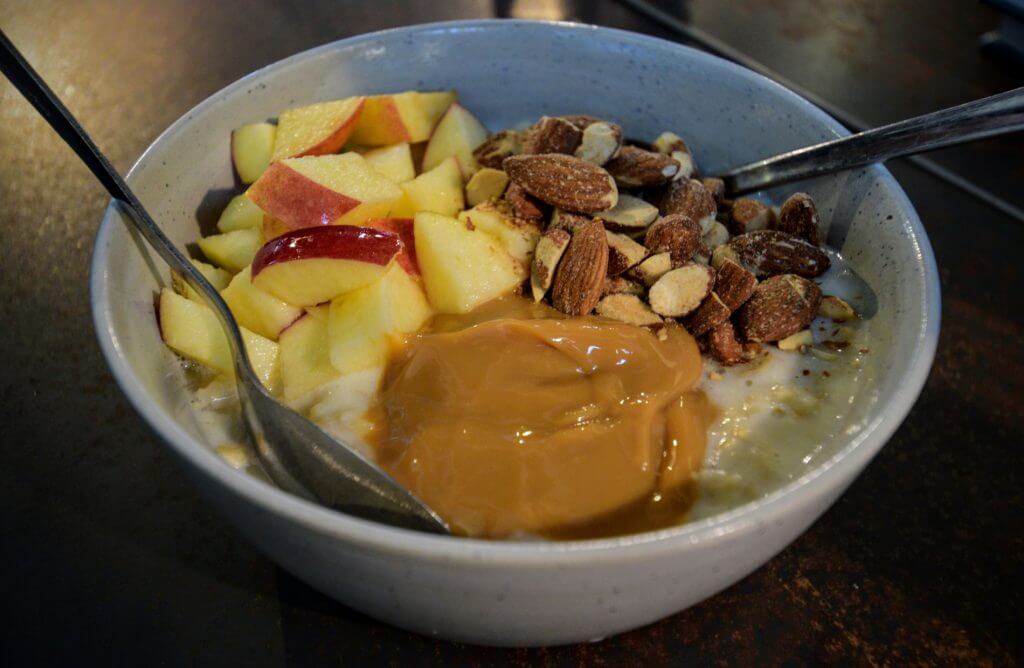 Porridge sounds pretty common, but this place knows how to spice it up with savory and sweet options! Historically, porridge was the food eaten in these regions for sustenance, usually just to fill you up. Grød in the same Torvehallerne market, has taken it and turned into an experience. We got oatmeal porridge with diced apples, roasted almonds, and dulce de leche. We shared a big bowl and it was so filling yet delicious! The company was started by a young Danish woman.

How Much Did We Spend?

Spending is based on the total cost traveling as a couple together for 3 nights/4 days. The Nordic countries are known to be super expensive compared to traveling in other parts of Europe, but we managed not to spend more than our trips to other European cities such as Barcelona surprisingly!

*Price conversions are estimates as of March 2019.

What do you think about Copenhagen? How would you spend 3 days there?