How to Spend 4 Days in Slovenia

So many times, we get asked out of all the places we have traveled, which place was our favorite. This is such a difficult question to answer, because each place has its culture, beauty, and uniqueness, plus city vs. nature. As an American, Slovenia was not a country on my radar when it came to traveling, until living in Europe and learning more of what it had to offer. Now after visiting 19 European countries, this destination is one I would most recommend! First of all, it had some of the most gorgeous landscapes, plus the capital Ljubljana was awesome.

On our last trip before moving back to America, we planned a Italy, Slovenia, and Croatia roadtrip. We spent 3 of those days in Slovenia, and wish it were more, although this post is on 4 days.

A Little About the Country

Slovenia is a Balkan country on the Adriatic Sea (connected to the Mediterranean Sea), and borders with Italy, Austria, Hungary, and Croatia. This richly historical central European country was once a part of Yugoslavia and became independent in 1991.

The language is Slovenian, the currency is the Euro and they are a part of the European Union.

How We Got Around

We rented a car for our trip because the sights we wanted to see were much easier this way. Be mindful if you rent a car and plan on driving on a motorway or expressway, you will need a vignette for the car, which is a road tax. We bought one of these at a gas station as soon as we entered one of the main roads of the country. If you do not have a vignette sticker while exiting the highway and are caught by a policeman (they use binoculars!) , you will certainly be fined. We did not need this sticker for Italy or Croatia, but in Slovenia it was necessary!

For this trip, we had round trip flights out of Venice so that’s why we went back to Venice, and it was the cheapest option for us. Also we drove cross country borders with the rental car, which was fine they said but we could not drive in non-EU countries. The fee for dropping off the car in a different country than we picked it up in was also high, so another reason we opted to return it back to Venice.

During our time in Slovenia, we based ourselves out of B&B Julija in the capital Ljubljana and did our day trips from there with the rental car. This is not right in the city center but public transport is available. We wanted a place with free parking, and breakfast every morning since I was pregnant at the time! (Food was a must first thing in the morning without delay ha). Plus the people who worked there told us where we could drive and park for free in the city. The place was so comfortable, clean, and a good breakfast.

We entered Slovenia from the Italy border driving from Venice. Instead of taking the highways, we opted for the scenic route along the Vrsic Pass. These were some of my favorite landscapes. The Vrsic Pass goes through the Julian Alps and is in the Triglav National Park. The mountain roads had some of the sharpest hairpin turns we have ever been on. I took a screenshot of the google map with our directions!

The Soca River known as “The Emerald Beauty” had unbelievably clear waters and the color was unreal yet cold. We stopped and parked at Kamp Konita for some photos. There are multiple other places for sights to stop along the route if you choose.

Lake Bled is a fairy tale location with a medieval castle overlooking from the cliffs, mountains surrounding the water, and an island in the middle with a church on it. We were there in July and it was quite the popular destination to be! Parking was hard to find. Don’t forget to try the Bled Cream Cake while there. There’s so much you can do at this location like renting a boat, touring the castle, eating out, swimming and so on, or you can sit and chill admiring its natural beauty. This is a place you can spend the whole vacation just at this lake and be satisfied.

Vintgar Gorge is less than 5 miles from Lake Bled and has more beautiful waterfalls and scenery. Narrow wooden bridges take you along a course and sometimes we had to wait for people coming in the opposite direction before we could pass. We went in the evening so for us it was less crowded. It does not loop around, so we walked to the end and turned around to come back on the same path. This place has been open to the public since 1893. 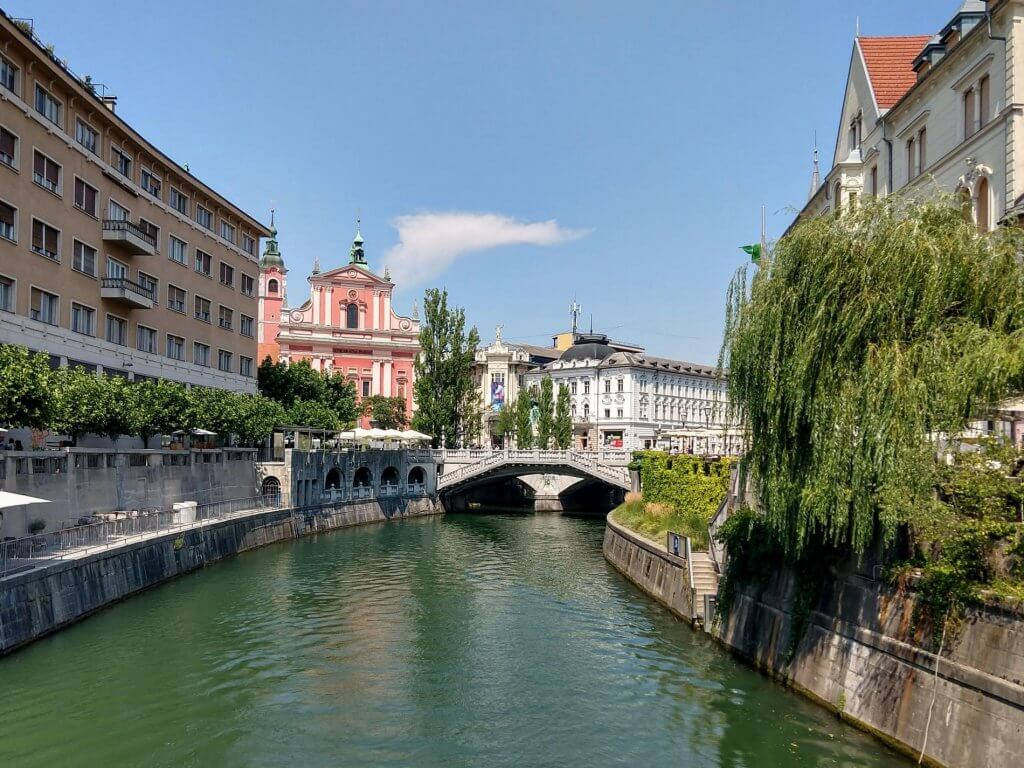 Ljubljana is the capital of Slovenia and the largest city. It still seemed pretty small, as it’s one of Europe’s smallest capitals, but that was the nice part about it. The walk along the river with all its bridges crossing over and outdoor cafes are enjoyable.

We parked at the top of the hill for free at the castle and walked down. We got lunch at the Central Market and saw the sights such as the Ljubljana Cathedral, Robba Fountain in the town square, the Preseren Square, Cerkev Marijinega Oznanjenja (aka Pink Church), and its many bridges including the Dragon Bridge.

Predjama Castle, like Lake Bled, is another one of those fairytale places. It’s built right into the rock cave! It is the world’s largest cave castle and ranks as one of the ten most fascinating castles in the world. Tickets are available to tour the castle. We decided to take a look from the outside only and continue our drive to the coast instead.

Slovenia only has 29 miles of coastline on the Adriatic Sea. We picked the town of Piran to visit the coast and it’s one of Slovenia’s major tourist attractions. We parked at a parking garage and took a free bus to the main Tartini Square. We walked along the crowded “beach”, which was more like a sidewalk on the water, but pretty nevertheless. The top attractions were St. George’s Parish Church and the Bell Tower next to it with a view, Tartini Square, the remaining parts of the Walls of Piran, and the Venetian architecture.

Out of Venice, Slovenia, and parts of Croatia, Slovenia was the most top ranking for us. I’d encourage anyone to take a trip there. There was so much in this country that we missed and would love to return to see the rest one day.