How to Survive International Travel with a Toddler

We survived our first ever flight, which happened to be an international trip, with our toddler. Our first international trip was supposed to be when she was 5 months old, but due to covid, turned out she was 20 months instead. I think about how much easier it would have been when she was 5 months old! The fact that she’s walking, doesn’t like to sit still for long, and gets frustrated naturally makes traveling with a toddler challenging to say the least, but if we can do it so can you! Hoping to share some tips that I received and used that helped us on route.

Now she has had a total of 7 flights under her belt! And she definitely knows what an airplane is when we see one. Below is some advice we gathered along the way.

A variety of snacks on hand is the key. Something that’s already individually portioned and somewhat mess-free helps. We brought individual sized goldfish bags, larabars, fruit gummy snacks, and fig bars. During take off I gave her a lollipop sometimes too hoping that it would help if she had a problem with ears popping. She never seemed to be bothered by it though.

Maybe you don’t allow your kids screen time, but sometimes it can be extremely useful in situations….like a 9 and a half hour flight. However, this is not the only thing to rely on for entertainment because she tired of this too, so having activities to alternate was vital. It’s like you need a magicians bag to keep pulling things out to wow them.

We have a cheap Amazon tablet just for her to use during long car rides, that we pre-download music and shows we know she likes, so we don’t have to depend on wifi. Don’t forget to bring along the charger to use on the plane or airport. Isabel is currently loving some Brazilian cartoons called Mundo Bita and Galinha Pintadinha. On the flights in Brazil there were lots of other kids playing the same cartoons, so we could definitely tell she’s up-to-date on popular Brazilian kids stuff!

If you get a window seat, the window is a perfect opportunity to put things up there to play with! I got some reusable farm animal clings to use just for the trip. These were a big hit. 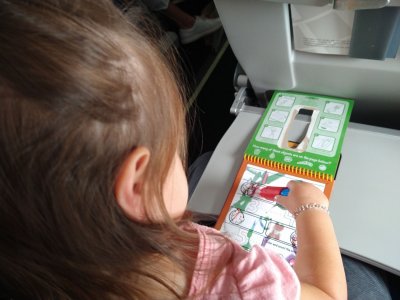 The Melissa & Doug On the Go Water-Reveal Pads are excellent because they can be used over and over again. It comes with a refillable water pen that functions like a paint brush. Once it dries, it can be done all over again! This wasn’t only useful for the flight, but when we went out to restaurants too. There’s multiple varieties to choose from, but I got the Alphabet, Animal, and Number Themed pads to bring. Still using them today. 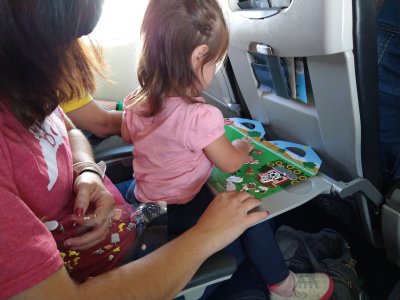 Another Melissa & Doug creation, these Puffy Sticker Play Sets are probably what kept her entertained the longest! It comes with reusable puffy stickers, to arrange on a double-sided glossy board. They are super thin and easy to pack too. I got the farm animal, safari, and pirate themed ones because I knew she would love the animals. A few of the stickers are tiny, so with the younger kids it’s better to keep an eye because Isabel wanted to put those in her mouth at times. Overall, I was so happy with this purchase. We’ve used the farm animal one the most and by the end of the trip, the stickers were not working as well anymore. But they lasted through 7 flights, airports, and even in Brazil so I got my money’s worth! Highly recommend these for flights.

Getting to travel to Brazil before Isabel turned 2 was a big deal, because it meant we didn’t have to pay for a seat for her! Woohoo! Now looking back, we needed that seat! For a short trip, it wouldn’t have mattered but with long overnight flights, it was super uncomfortable and cramped. On the way back for the overnight flight, we upgraded for 5 extra inches of legroom. It ended up being more because we were behind the wall that separates the business class, which was enough room to walk through. This was by far worth the upgrade. Sitting up trying to get yourself and an almost 30-pound kid in your lap to sleep too is extremely awkward and almost impossible if you both want to actually sleep. She kept waking up periodically crying out because she was definitely uncomfortable to top it off.

In the future, she will have to have a seat since she will be older than 2 but I plan to get one of the inflatable pillows meant to use on airplanes so the toddler can stretch and sleep in their chair!

For the infants, I noticed that the seat in front of the wall we upgraded to can be used for a bassinet that the airline has. This is perfect for a place a baby can sleep. It was attached to the wall and the person beside us used it for her baby. Hoping we can do that when we have baby # 2, plus the pillow for Isabel. 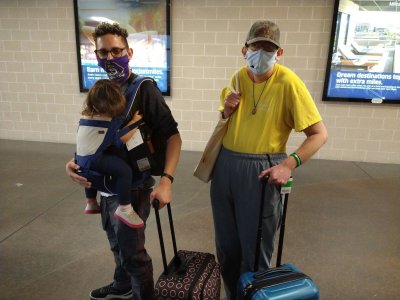 We didn’t travel with a stroller on the way there because we thought we’d have too much to juggle. But we bought a cheap one in Brazil and carried it back through the airports with us. It’s an item that does not count towards your luggage and can be used all the way up to boarding the plane. You leave it at the door and will be gate-checked for you. Isabel doesn’t always like to ride in a stroller so it wasn’t that handy for us but the fact that you can carry the item without counting toward your luggage helps.

We still use the chest/back carrier for her sometimes and that works better for us still. The airports in the US, Marvin could keep on holding her in it and go through security easily. In Brazil they required her to be taken out though. That was frustrating when it came at a time when she was fast asleep.

In the airports, make sure to give the child plenty of running and exploring time together to exert their energy before the flights! Strollers and carriers are great but not for a 24-hour period of travel.

We did not bring along our car seat for her because we got Marvin’s brother to buy one in Brazil and bring it to the airport to use in the rental car. This was ideal for us since his brother is storing it for when we return to Brazil again.

The next time we travel to Brazil, we should have baby # 2 with us, and we plan to bring the car seat in some type of travel bag meant for car seats to gate check like the stroller. 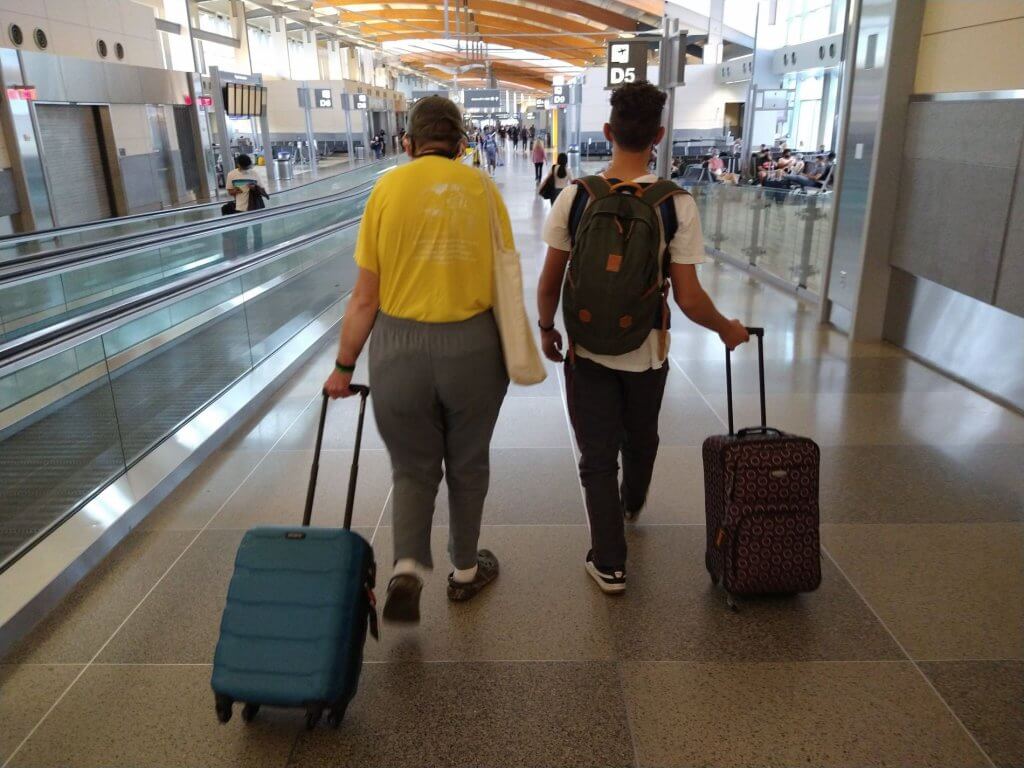 One thing we realized was that we’d rather have less things to lug around with us through the airport, especially with a kid that comes with all the extra stuff already. Me, my brother, and Marvin all had a carry-on bag with wheels plus a personal item. Next time we’d like to leave the carry-ons with wheels and keep our personal items. Much of the stuff we didn’t really need either, but we wanted all the luggage space we could get so we could bring Brazilian goodies back home with us.

Be Prepared for Changes in Plans 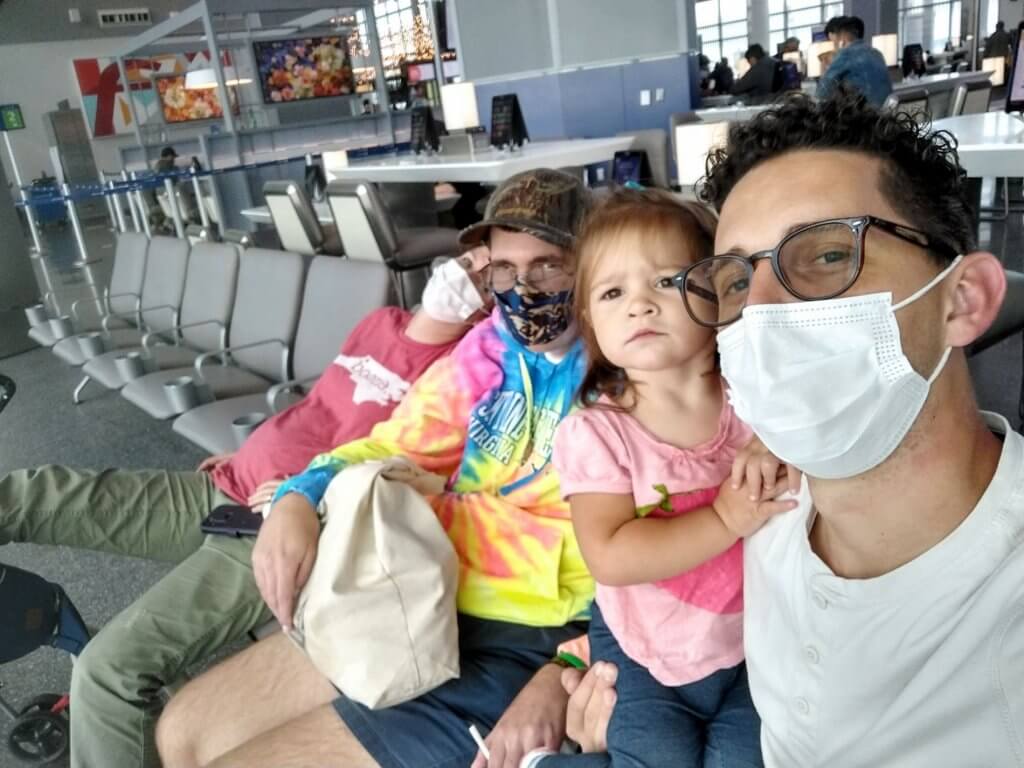 After missing our last flight home in Newark Airport

After reflecting about the trip, I know that some situations are out of our control, which goes for all areas of life. On our way back from Brazil we missed our last flight due to a delay which added an extra 12 hours of travel. To someone ready to be home, pregnant, with a toddler and exhausted after a terrible night of attempting to sleep on a plane, this was a huge deal at the time. But staying calm and handling the situation is important. By the end of the trip, I needed someone to be telling me this information.

All in all, it was a great trip and Isabel did fantastic. The activities I brought along, I bought on Amazon ahead of time, and revealed them to her on the flight so it was a novelty item to have fun with.

Every kid is different, and things that worked for us could not work at all for your family. It’s almost trial and error when it comes to the first trip and learn as you go! Hopefully some of this advice will resonate with you though! If you have other advice on how to make travel easier with a toddler, please please tell us below so we can implement it in the future! 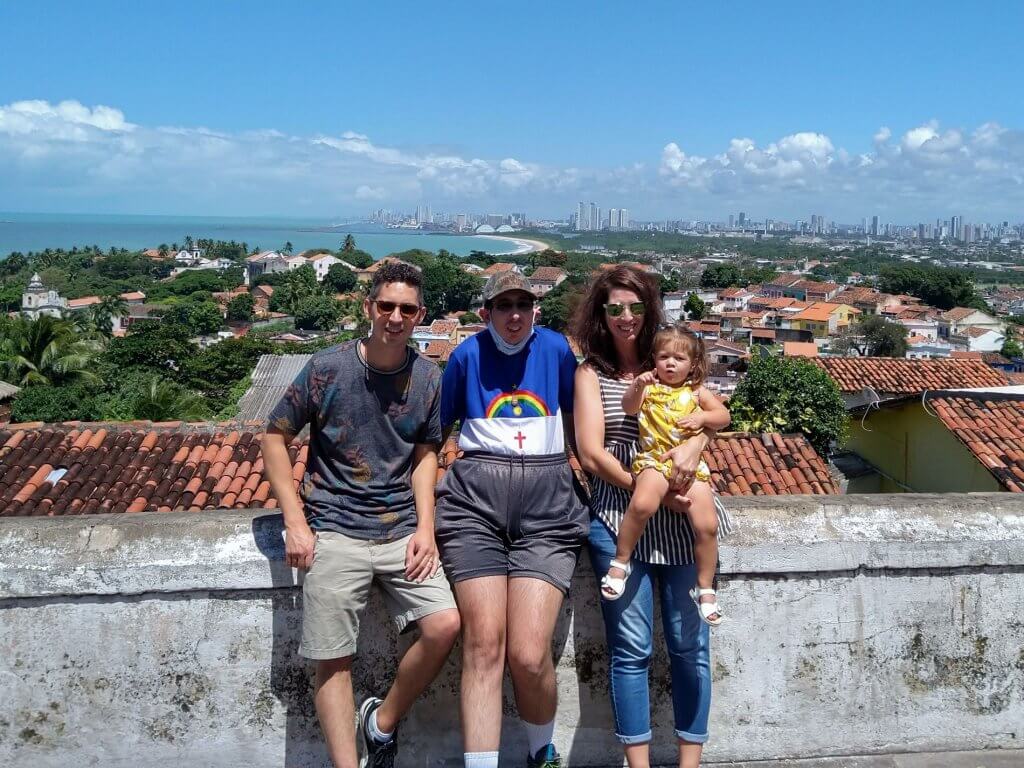