How to Acquire the "Gift of the Gab"

When taking a trip to Ireland, you have to go to Blarney castle and kiss the legendary Blarney stone! It is said to give you the gift of eloquent speech.

Blarney Castle is located about 5 miles north of the city Cork, Ireland. The castle is full of gardens and walkways to roam around freely.

The castle was first inhabited by the King of Munster, Cormac McCarthy. Queen Elizabeth I desired possession of the land due to belief of rebellion against the English throne. McCarthy would offer banquets and negotiations to peacefully delay acquiring it. The queen, being in frustration called it all “blarney”, and a new word was created. The word has come to mean speech with clever, empty flattery now.

Where did this rock come from anyway?

There are multiple stories on the stones origin from being the stone that David hid behind to escape being killed by Saul, the stone that Moses struck and water rushed from during the Exodus, or from the Stone of Destiny given to the McCarthy’s as gratitude by the Scots, just to name a few. Then it is said that a witch discovered the powers of the stone after being saved from drowning from the McCarthy’s. Which one do you believe?

To get to the stone you enter inside the castle up this long winding stone staircase and wait in the line in the open tower. There is a man that sits on the ledge that helps each person. So you lie down on your back and stretch out and kiss the stone upside down! 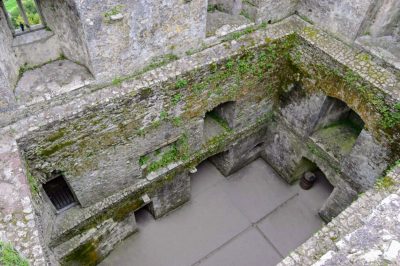 View inside the castle from the top

It was more difficult than what I expected it to be, especially when I saw an older gentlemen struggle to reach his lips to the stone. I am a bit afraid of heights, but I had no problem doing this. Everyone gets an automatic photo snapped with a professional camera and is available to purchase at the end if you desire. I was so thankful they did this because you only have about 2 seconds to kiss it before it’s the next person’s turn! I was fumbling with the camera while it was Marvin’s turn without even realizing it was still off!

In the past, kissing the stone was a dangerous challenge as you were held by your ankles and went head first with nothing to stop you from falling, but today there are iron bars below and to grab a hold of for protection.

Even if the the castle wasn’t famous for the Blarney Stone, the castle and grounds itself were amazing alone and worth the visit!

Around the Blarney castle gardens

I have to admit, it is a bit gross to be putting your lips in the same place thousands others have, but… YOLO! Did it give me the gift of eloquent speech after? Ha yes, that’s how I wrote this blog post!. Would I recommend you go see the castle grounds and kiss the stone too? Yes!!

Whichever legend you choose to believe, it should be in the top 100 things to do before you die.

Would you kiss the Blarney Stone? Where do you think the stone came from? Feel free to comment below!