We took advantage of 5 days off in a row to take some time to visit Belgium. Belgium is a small country, but still has so much to offer. Known for its food, which we pigged out on, especially the waffles and chocolate. (We created our own self-guided chocolate tour in Brussels!) The geographical region of Belgium is roughly only a fourth the size of my home state, North Carolina. But yet, the population is close to the same for both places at about 11 million people.

One of the most interesting things we found about Belgium, was that they have French, Dutch, and German speaking regions in one country: depending on the area you are born, is what you grow up speaking. Some Belgians, of course, speak more than one language, but this is not the case for all. Everything was translated into more than one language, such as the road signs and train station signs.

A thing to note is that the Belgian capital Brussels is also the capital of the European Union and NATO! This in itself tells enough of its importance.

We chose to base ourselves in Brussels, and take day trips by train to Ghent, Bruges, and Antwerp. It’s so fast by train to get to these cities. The farthest we went was only an hour away!

From London, you can take a train, bus, or flight (or even drive). We chose the cheapest, longest journey, which is by bus. From London Victoria station, we caught a Flixbus to Brussels. This took about 6 hours, including passport control at the English Channel before going through the underground Channel Tunnel. We actually had 5 days, but our first and last days were spent taking the bus. But it still gave us 3 days to enjoy!

Here’s our 3-day itinerary, which we hope you will find useful and doable! I will write more detailed days on each place at some point. 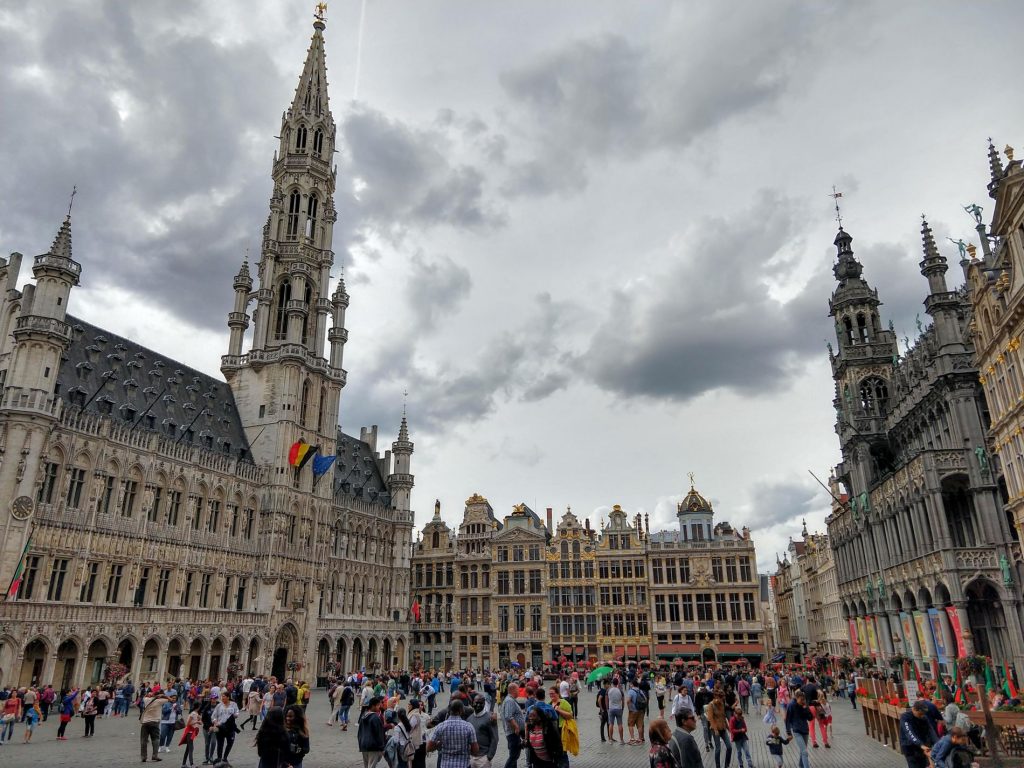 The capital of Belgium, and one of our favorites of the 4 cities we visited. The main square called Grand Place, is phenomenal and also very old. We revisited at night, and so many people were just sitting in groups, hanging out with food and drinks – it was neat! The whole city is walkable with the exception of visiting The Atomium. We did our own self-guided chocolate tour, which is a must! You can book a tour as well, but we did our own and saved a ton. My favorite chocolate was from a shop called Elisabeth. Some major sights to hit are the Grand Place, Manneken Pis (a statue of a boy peeing – yes an odd sight but iconic), Mont des Arts, Royal Palace of Brussels (it was free to enter for us, only during certain months of the year!), St. Michael and St. Gudula Cathedral, Royal Gallery of Saint Hubert, and The Atomium which is a huge statue resembling an atom. 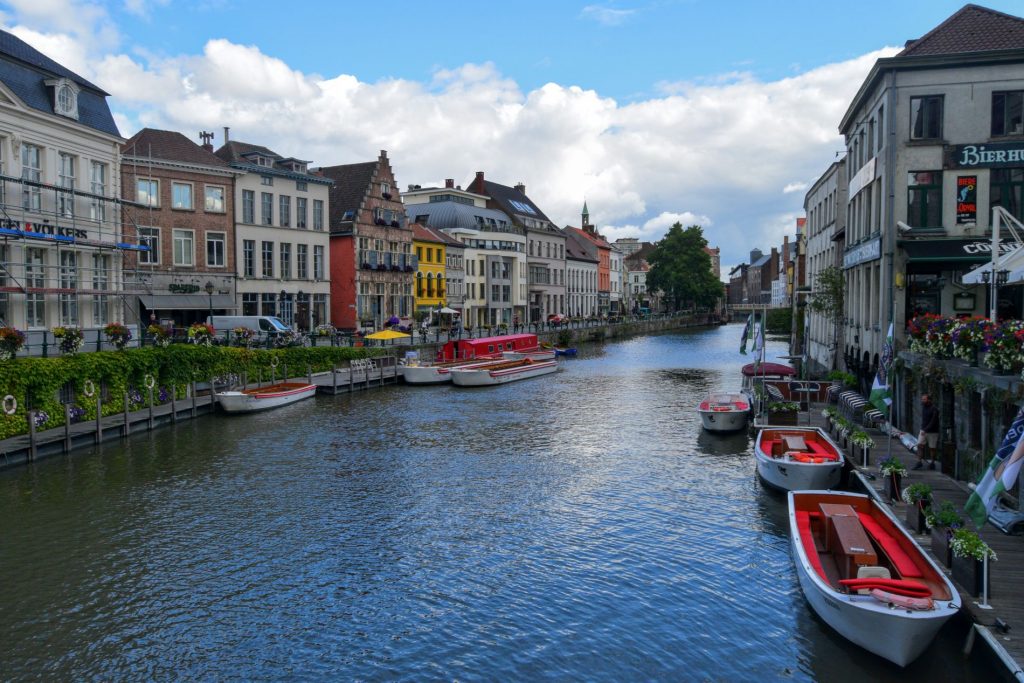 We did a half-day in each location. We got the train at 9:26AM to Ghent first, which was only a 30-minute train ride. This was Marvin’s favorite place because it had the least amount of tourists, but still had an authentic feel. Some of the major sights here are St. Michael’s Bridge, Saint Nicholas Church, Belfry of Ghent, and the Gravensteen Castle. We were back at the train station to catch a train at 1:35pm to Bruges. There are trains about every 15 minutes, so it’s easy to show up at the station, purchase a ticket and hop on the next one going. 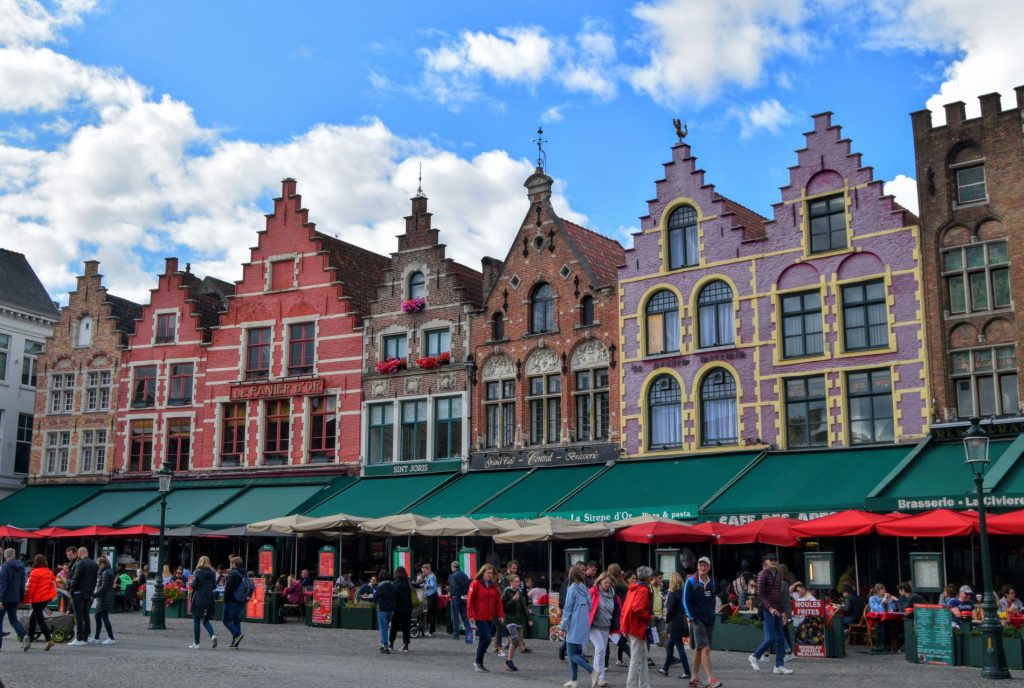 Just 30 minutes by train from Ghent, we arrived to our next destination. This place had a ton of tourists and it turned us off a bit. By the end of the day though, the crowds were fewer and it made it more enjoyable. This city along the canal was really nice, with boating tours offered (which we went on). The Market Square is beautiful, especially the colorful buildings. The main sights here are the Belfry Tower in the Market Square, Church of Our Lady of Bruges, Ten Wijngaerde, Minnewaterpark, and Burg Square. We stayed late in Bruges because we wanted to try to get some night shots. But beware that the trains are fewer the later it gets, and we had to wait an hour before one of the last ones arrived. I think we took the train around 11:20 PM which got us back to Brussels after midnight. 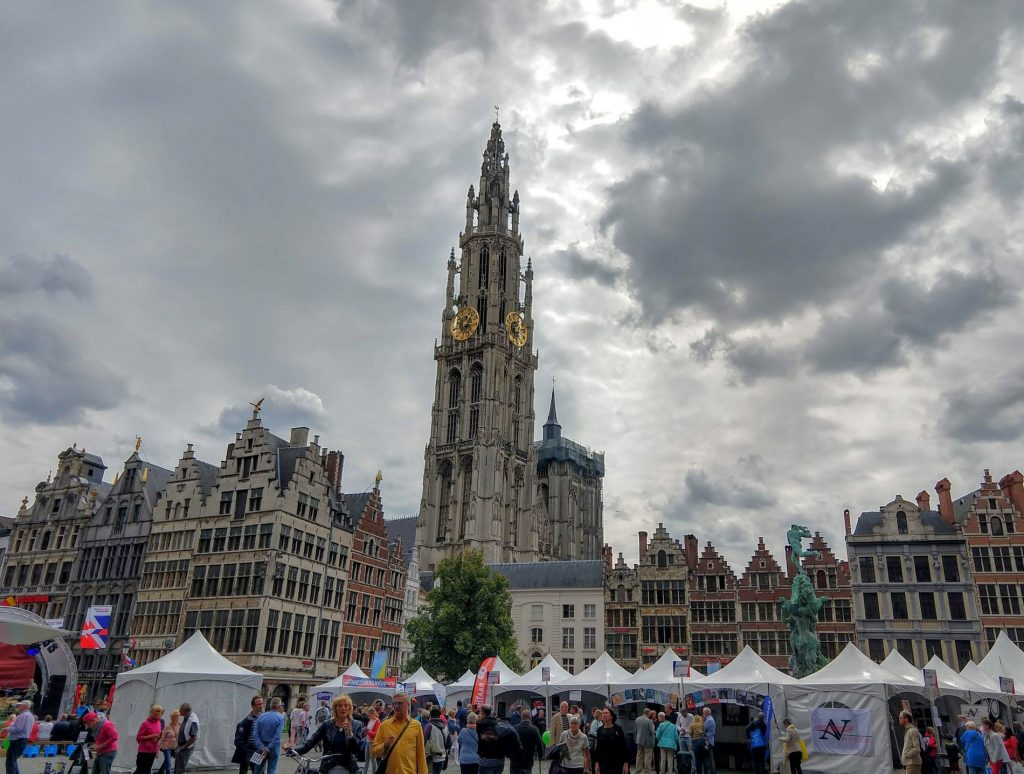 This was our last full day in Belgium, and we thought giving Antwerp a shot would be a great idea. We ended up on doing a half-day because we were ready to leave. Now some people really enjoy this place, but for some reason it was just okay for us after visiting the other cities. Antwerp is a port city at the northern border close to The Netherlands. It seemed like every place we went to was under construction, or were a bunch of tents everywhere up for this cultural festival going on. Usually we are all for events, but there was no food! The major sights here are the grandiose Central Station, the Zoo right beside the station, Rubens House which is museum of a famous Belgian artist, Cathedral of Our Lady Antwerp, Grote Markt, the Het Steen Castle, and Museum aan de Stroom which is in a cool red brick building and gives the history of Antwerp. We probably spent a total of 4 hours in Antwerp and went back to Brussels to enjoy our last evening there.

Belgium will always be a place in our memories that we thoroughly enjoyed. We kept a loose itinerary on which days we went where, based on how the weather was going to be. The fact that the trains are so easy to get to these places made it ideal. No need to book anything in advance. The highlight for us was being able to spend our last night enjoying Brussels again and walking back through the same spots. I’d encourage anyone to have at least 3 days in Belgium and even more than 1 day in Brussels if you have the chance.

If you are interested in the breakdown of the costs of our entire trip, I’ve included them below. We wanted to go cheaply, but an area we could have saved in was finding a cheaper accomodation in an Airbnb outside the city center. Instead, we chose to stay in a hotel that was within walking distance to everything. So for a total of 5 days, and 3 of those days touring, we spent a grand total of about $860 for the two of us. I don’t think that’s too terrible.

Let us know what you think! Have you been to Brussels? How did you spend your days here? Comment below!