Day Trip to the Jurassic Coast

We really enjoy budget friendly day trips or short trips to different places. Branching out to discover all England has to offer has been so fun. No matter what location you may be in, there are always places to be discovered. Our most recent one has been the Jurassic Coast!

England has this place called the Jurassic Coast which is a 95 mile stretch along the southern coast from East Devon to Studland Bay in Dorset. This place is made up of cliffs and rocks from a bunch of different time periods. Don’t worry, we didn’t see any dinosaurs roaming around, but I was waiting for one to pop out! The Jurassic Era was millions of years ago between the Triassic and Cretaceous Periods. From what the sign posts say, the landscape tells a tale spanning over 150 million years. If you are into hiking, cliffs and coastal beach paths, this is up your alley then! It’s also a natural World Heritage Site.

Since the Jurassic Coast is a long stretch, you really need some time to see everything. So if you are limited on time, such as one day, you really have to pick a particular location along the way and stick to that area. We started at the Isle of Portland and made our way west, to Poole.

The first stop on our route was the Portland Castle, situated right on the Isle of Portland. This castle is more of a artillery fortress than what you would imagine a castle would be. It was first built in the 1500’s during King Henry VIII’s time and was intended to protect the seas from the French and Spanish invasions. Later on it was used for other purposes, but only actually used in battle during the English Civil War in the 1600’s. You can tour through each room with an audio guide. English Heritage membership gets you in for free!

Another thing to note about this little isle is the portland stone, which is a limestone from the Jurassic period. This type of stone is used in various places and in many popular landmarks in London such as Buckingham Palace or St. Paul’s Cathedral for example.

This 18 mile long beach is considered a barrier beach and is formed of millions of pebbles. One end is right at the Isle of Portland. It separates from the mainland giving a small lagoon called The Fleet that provides protection to the land. It’s like a pebble dune instead of sand dunes.

After leaving Chesil Beach and Portland Castle, the seaside town of Weymouth is just a 15 minute drive. This tourist resort is a nice place to stop for lunch and walk around the harbor. We brought a picnic lunch from home though, so had a cream tea instead at Pascal’s Brassiere (aka Time for Tea). This is a French run restaurant, but the fruit scones were definitely homemade and warm. This has been our favorite place thus far for cream tea! (scone, clotted cream, jam, and tea with milk and sugar).

After plenty of cream tea, one of the most famous spots along the Jurassic Coast is Durdle Door. This is about 30 minutes driving east of Weymouth. This door arch was formed by erosion. Just to the left of Durdle Door is Man O’ War Beach. There are steps that lead you down to the beach at Durdle Door, but currently the Man O’ War Beach is not accessible. It’s free to view these beauties, but there is a charge for the car park if you are driving there.

You have the option to walk along the coast from Durdle Door to Lulworth Cove. We were fighting against time so we drove to the next car park. (We still had time left from our car park ticket at Durdle Door and it could be used at the Lulworth Cove car park as well!)

The first thing you see is Stair Hole, right beside Lulworth Cove, a natural cove formed by the waves. Admission is also free besides the car park. 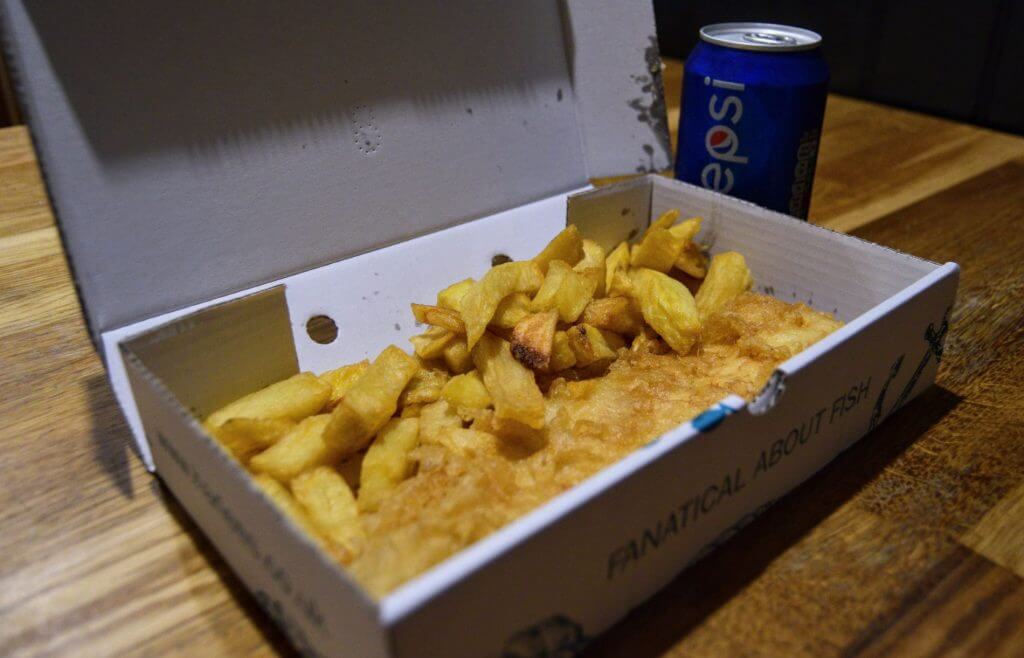 We didn’t get to stay to explore Poole due to the time, but we did have a fish and chips at Harlees Fish & Chips. We could tell Poole was a much bigger seaside town than others we have visited in England.

After dinner, was our 2 hour drive back to Surrey. It’s definitely easier to have a car or rental car to get to most of these places, but alternatively you can do tours that leave from London or catch a train from London and local buses. October was a really nice time to visit because although it was quite cooler, there were no crowds which made it feel more secluded.

Comment below and tell us if you’ve heard of the Jurassic Coast or where your favorite coastlines are located.