A Day Trip to Ghent and Bruges

If you are going to Belgium and want to see more than just Brussels, it is possible to go to both Ghent and Bruges in one day by train. We spent 3 days in Belgium and this was one of our day trips to check out both of these cities. Both are so cute in their own way.

We based ourselves in Brussels for the duration of our stay and took a train to these locations and another day to Antwerp. The trains are so efficient and an easy way to travel.

We got the train at 9:26AM from the Brussels central station and arrived to Ghent in 30 minutes! If you feel up to walking, the center of Ghent is about 30 minutes walking from the station. Here are a few things to see on the morning here!

Our first stop was St. Michael’s Bridge. Stop on this bridge for beautiful views. This is the area where you can see 3 towers in a row which make up the medieval skyline. Just turn around and take in the atmosphere. 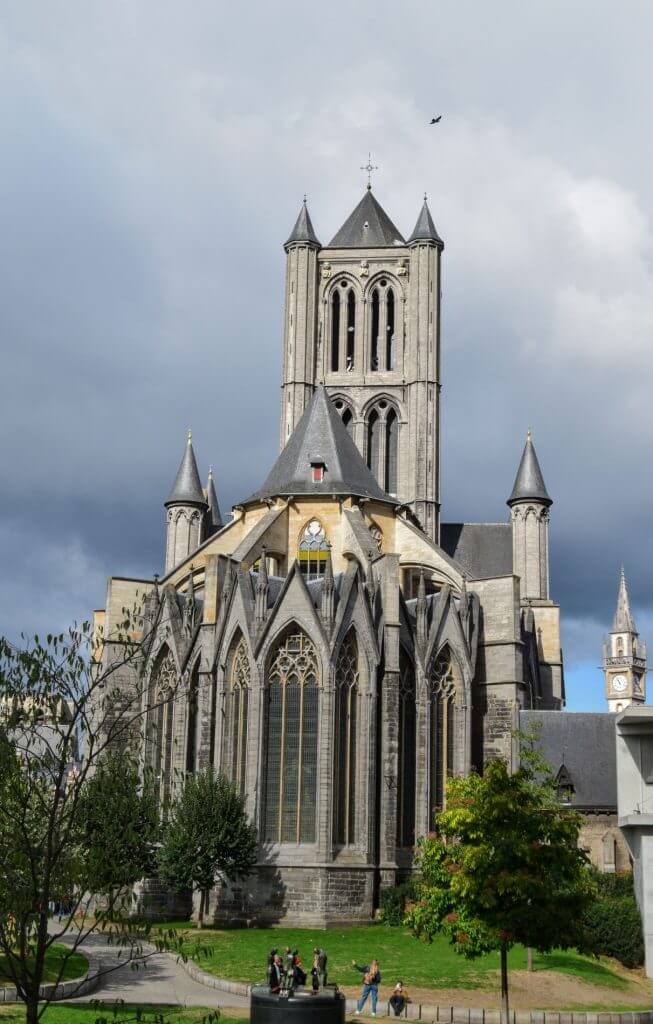 Saint Nicholas’ Church is a Gothic church, the first of the towers from the bridge, and it’s free to enter! 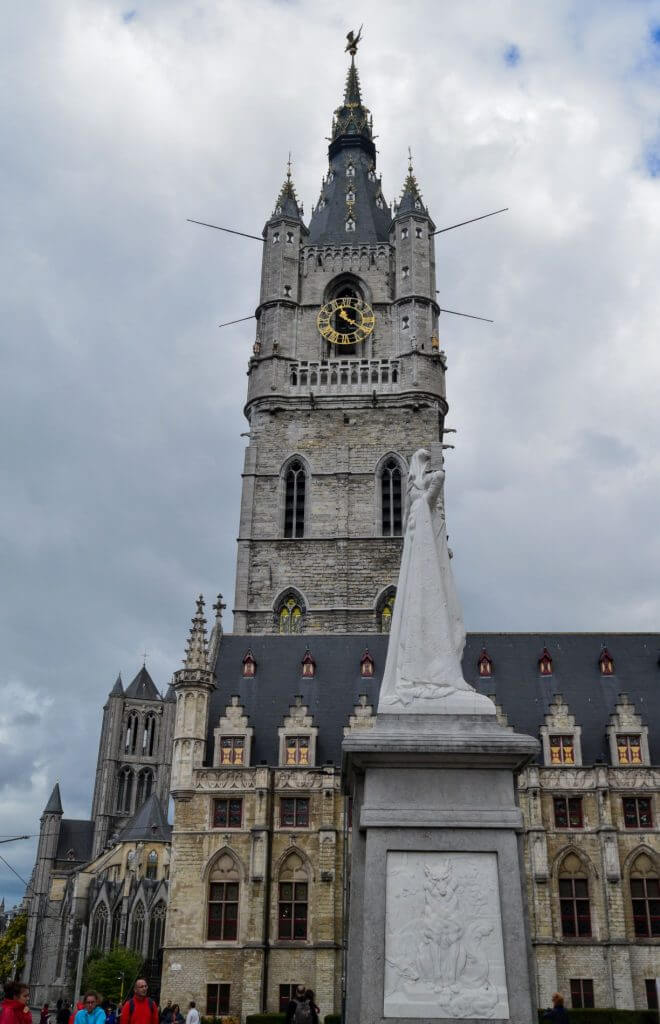 The middle tower between Saint Nicholas’ Church and Saint Bavo’s Cathedral is the Ghent Belfry, a UNESCO World Heritage Site. You have the option to pay to go inside and up the tower. 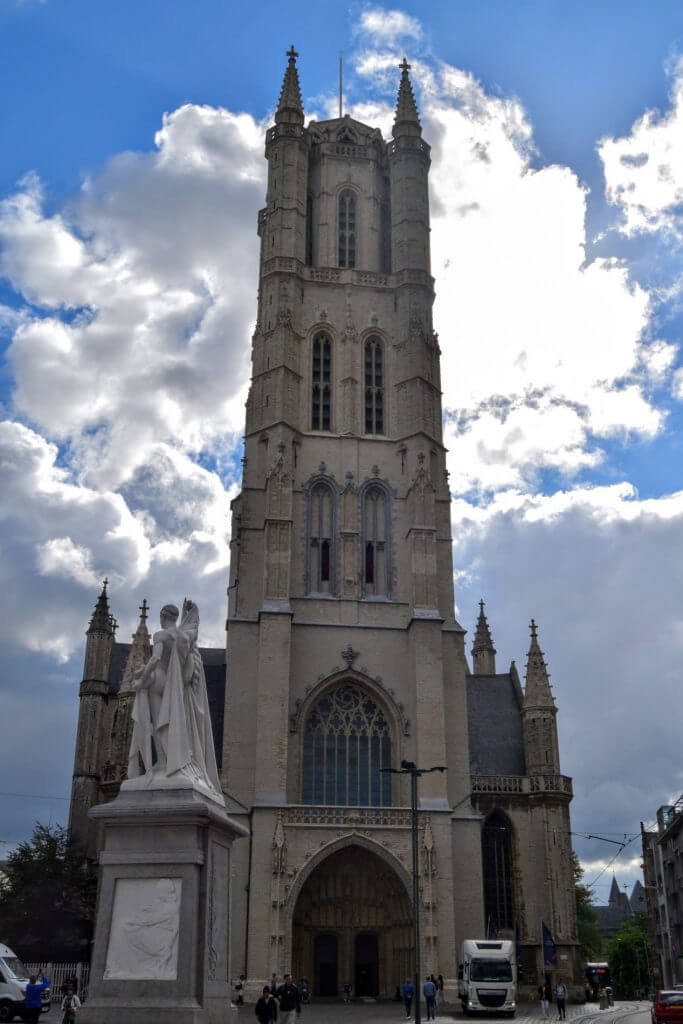 The third of the towers, Saint Bavo’s Cathedral is the oldest parish church in Ghent. It’s free to go in but pictures are not supposed to be taken. In the back we saw a whale skeleton hanging from the ceiling!! The skeleton is from 2015 when a young whale that died washed up to the port of Ghent and brought to shore by the fire brigade. It was sent to the university and eventually found its way in the cathedral. 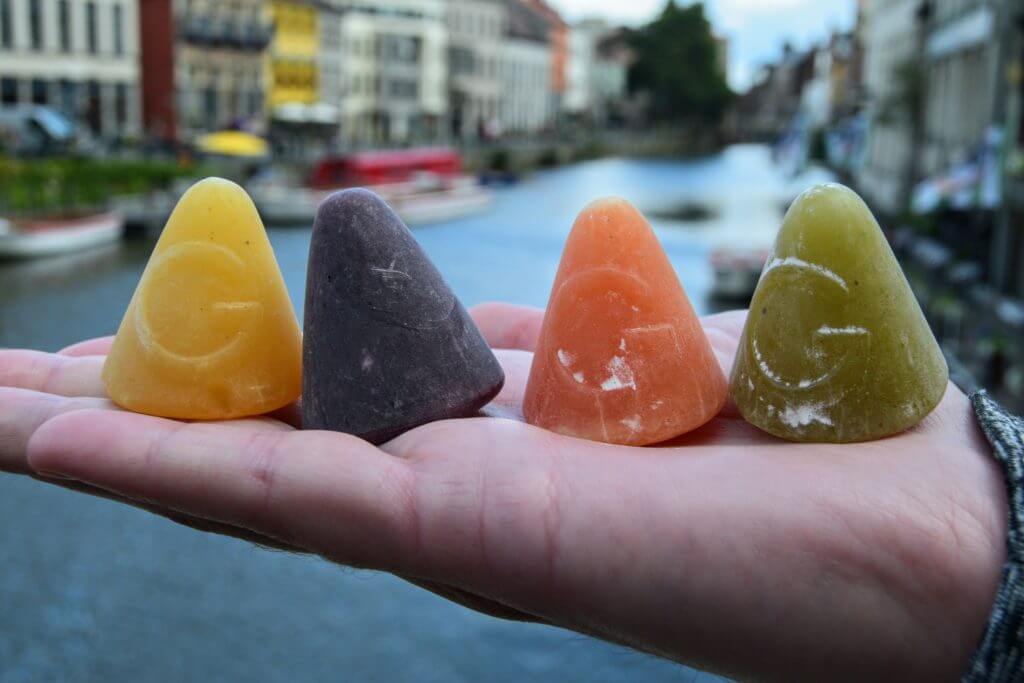 On the way to see the Gravensteen Castle, we stopped at the stands to get a Belgian waffle and found stands selling something called Ghent Noses or Cuberdon. They are similar to gum drops but a harder outside and soft jelly inside and in the shape of a cone. One legend says they were first be made by a pharmacist many years ago and then another legend has to do with them about monks. Either way, it’s a part of Ghent you must try! 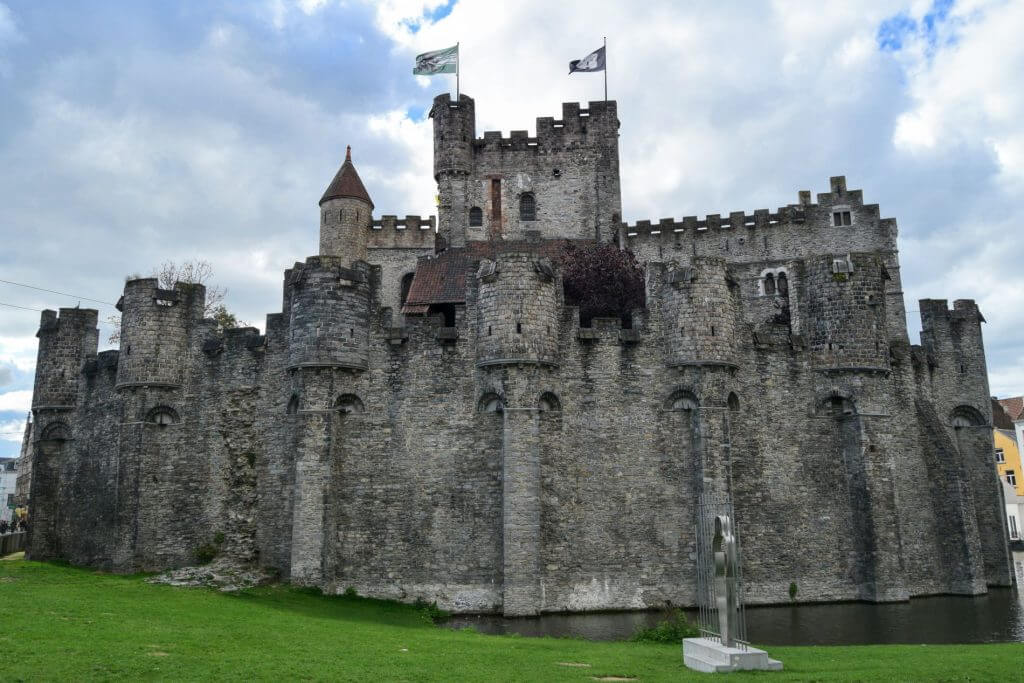 We walked by Gravensteen Castle to take a peep at this medieval fortress with a moat! If you have the time or left earlier in the morning than we did, then doing a tour inside I’m sure is great! Find a place to grab some lunch before heading back to the train station to start the afternoon in Bruges!

We caught the 13:45 train to Bruges from Ghent. The trains are pretty frequent so no need to book ahead. From the train station, we took a bus to the center to save some time and our legs.

Our first stop was the Market Square which is the center of the city. The most impressive building is the Belfry Tower. Opposite are the iconic colorful houses. Restaurants line the square today. It’s a good starting and ending place when exploring the city! 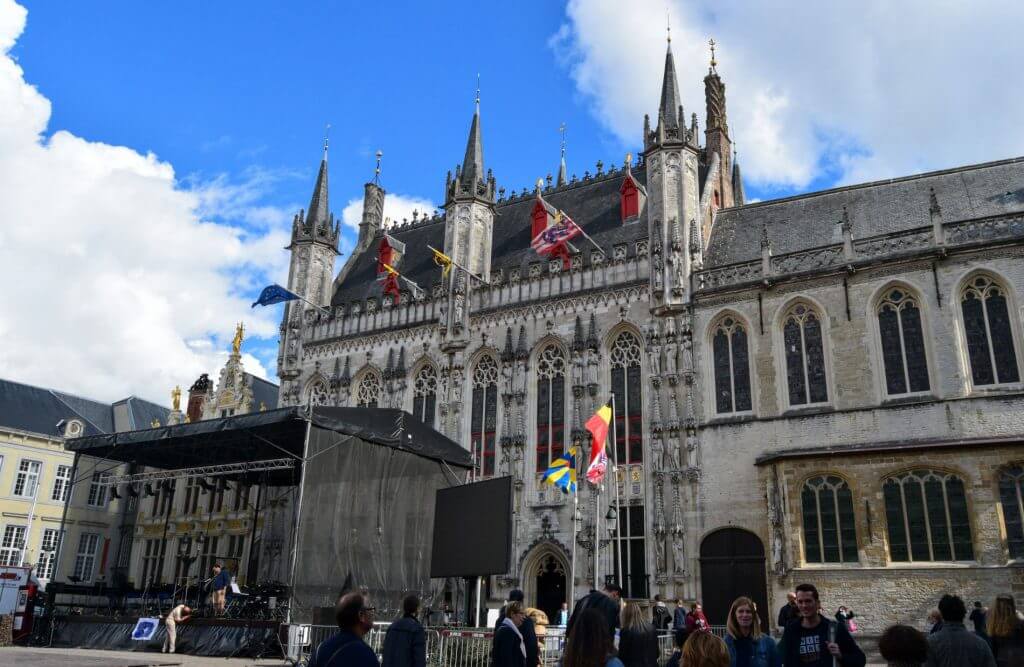 Adjacent to the Market Square takes you to Burg Square and holds the Town Hall. There was an event going on when we went to the square. 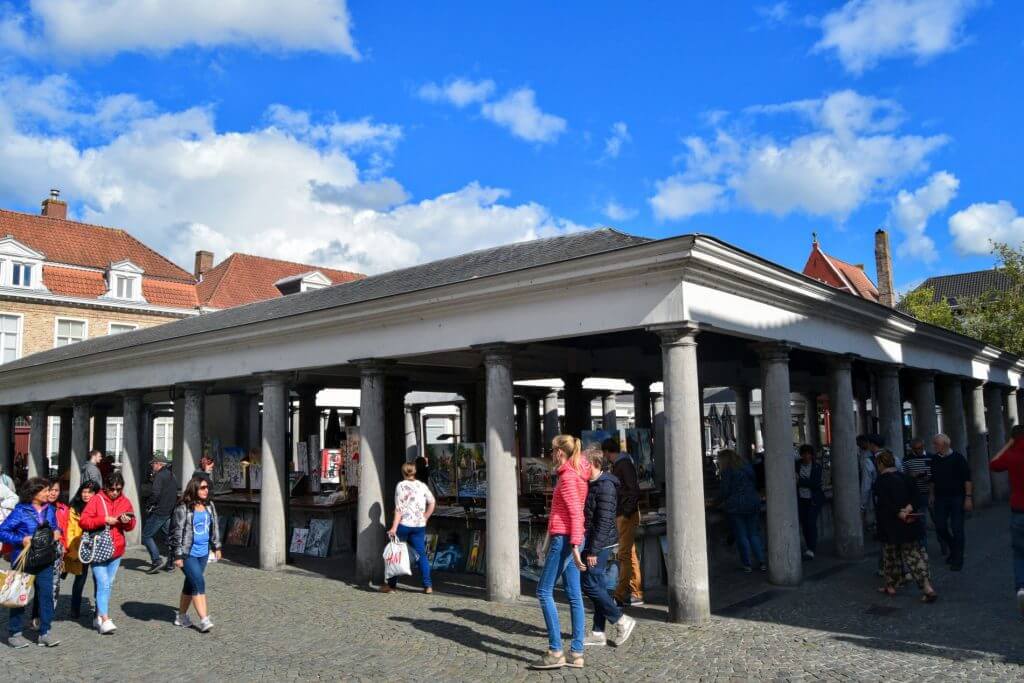 Just across the river is the Vismarkt or Fish Market. Fishmongers have done their business here since the middle ages and is located right on the canal.

The canal boat tour was charming. It was a 30 minute ride and 8 euros a ticket. It took us all along the canal, under many bridges, and explaining the sights along the way. The guide translated the tour into English, French, and Dutch!

Church of Our Lady Bruges 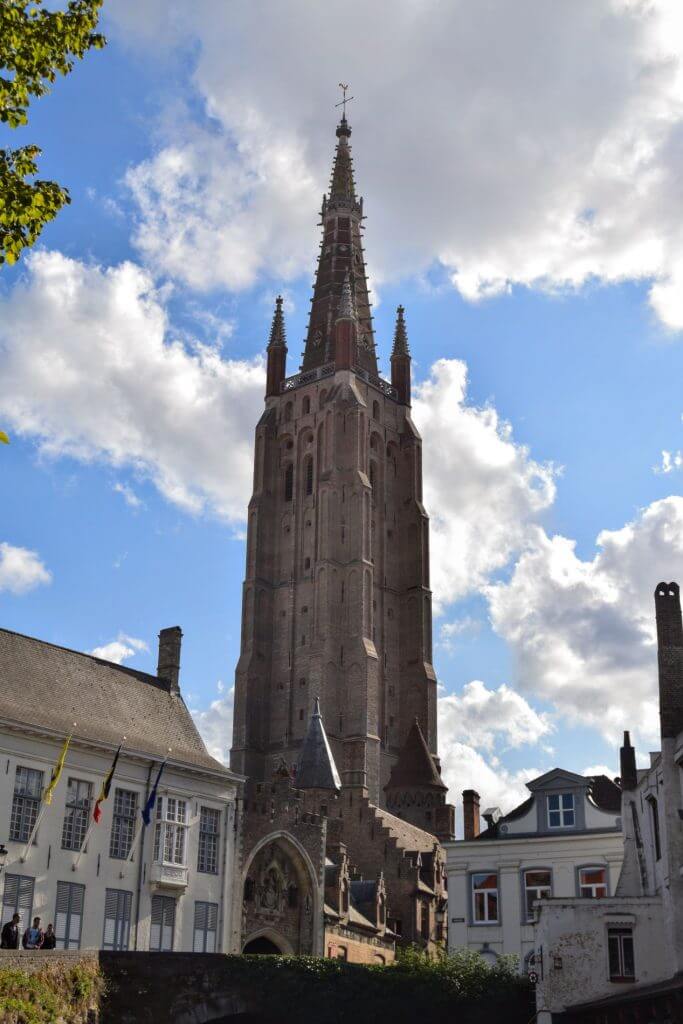 Church of Our Lady Bruges

The Church of Our Lady Bruges is the tallest structure in the city. We strolled by since we saw it from the Canal Tour. 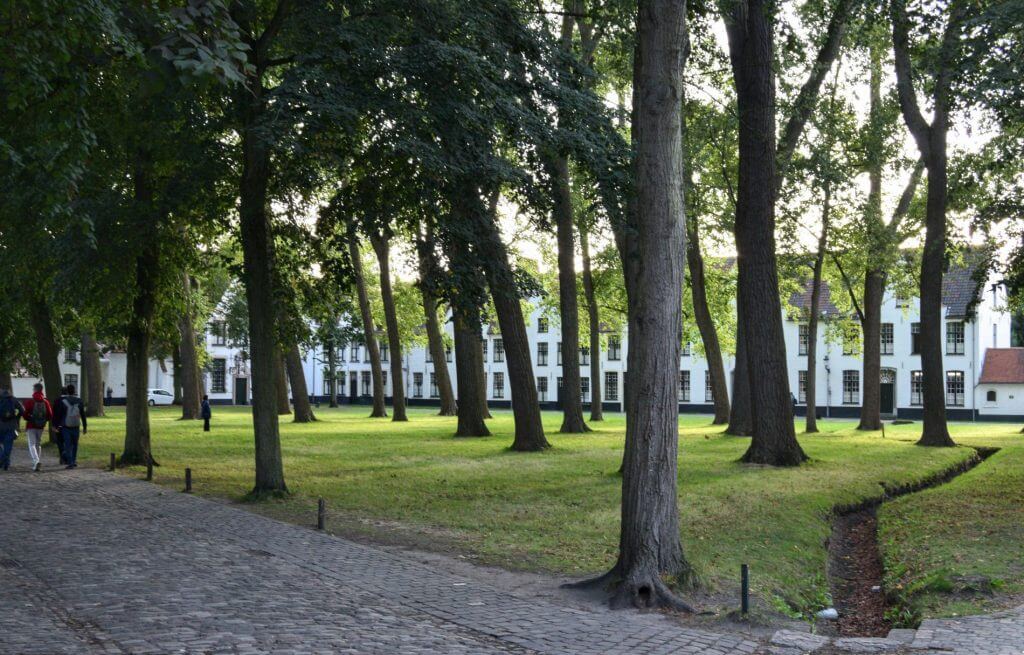 Only if you have time would I recommend walking through Begijnhuisje. White houses in a garden were once home to beguines (which I read is similar to a nun but without taking vows). You can go through and see what life was like in the 17th century from what I hear. Today nuns from the Order of St. Benedict reside here.

After a relaxing afternoon, we went back to the Market Square to have another view with the sun going down. Less tourists were here at this time as well. We ate dinner at a pub near the Vismarkt with live Spanish music in the market with salsa dancing.

At the end, we took a bus back to the train station where we went back to Brussels. It is possible to go to Bruges first which is the farthest away, and work your way back to Ghent, then Brussels. We wanted to be in Bruges later in the day when we figured most of the tourists would be gone by then. Either way works though!

If you’re interested in more on Belgium, check out more of our posts here!